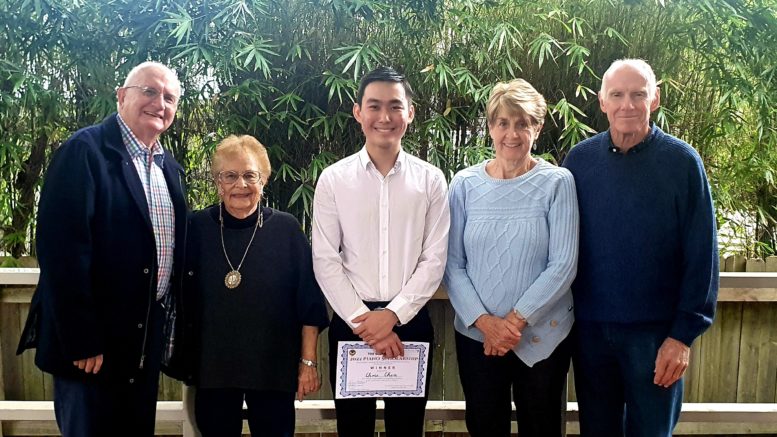 The scholarship was one of several awards handed out on May 22 following two days of the annual Music Scholarship concerts hosted by Pearl Beach Progress Association last weekend.

Held in partnership with the Central Coast Conservatorium of Music, the annual awards concerts have been running since 2005, offering performance opportunities to students who have excelled in their chosen fields.

Chen performed works by Clementi, Albeniz and Chopin to take the $1,000 scholarship.

He has been playing for 11 years and has received numerous accolades over the years.

The $1,000 2022 Pearl Beach Music Scholarship, sponsored by Pearly’s Cafe, was won by vocalist Mia Cross, who gave renditions of Meadowlark and The Girl in 14G.

Adjudicator, Benjamin Kopp, said he was generally moved with the high quality and talent presented over the weekend, making it extremely difficult to choose recipients.

“Frances was an avid musician all her life; she started studying piano at age eight and continued her love of music through professional roles in schools and private tuition,” Grove said.

“Whenever possible she fostered and nurtured that love of music with young people.

“I congratulate Kaito on his amazing performance.”

The new People’s Choice Runner Up award of $250, sponsored by Coast Realty, was presented to violinist Minjy Lee, a 14-year-old Narara Valley High School student who played Violin Sonata No.5 by Beethoven and Spring I Allegro by Vivaldi.

Accompanist for the two days of concerts was Noah Peres.

The Junior Showcase concert, introduced in 2013 to celebrate solo instrument and vocal performance by the Central Coast Conservatorium junior students, was a highlight of the weekend, with a diverse program performed by 10 students, the youngest of them just eight years old.