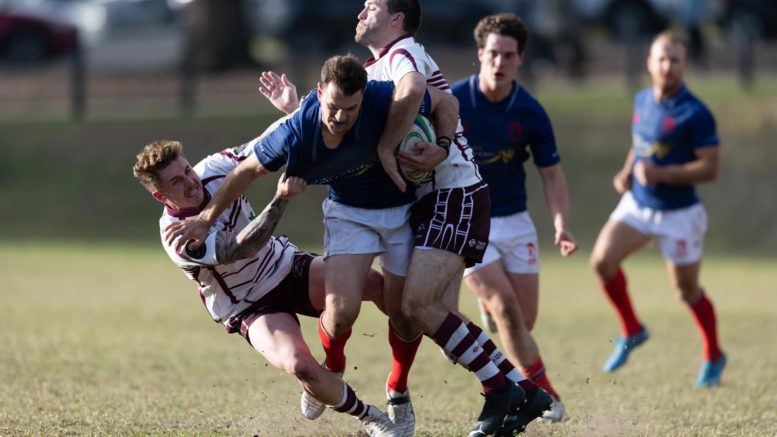 A nail-biting match of the day in the Central Coast Rugby competition at The Haven Oval on June 18 saw Terrigal and Kariong play out a 17 all draw.

The match was intense and hard fought for the entire 80 minutes.

Terrigal opened up the scoring with a converted try midway through the first half to take a 7-0 lead, with Kariong’s Scott Hanley kicking a penalty goal late in the half to take the score to 7-3.

Kariong scored its first try early in the first half to take the lead by 10-7, but a penalty goal to the home side soon levelled the scores at 10 all.

Both teams crossed for a converted try, first Kariong, then Terrigal, for the match to be all locked up at the fulltime whistle.

Warnervale opened up the scoring, jumping to a 12-0 lead after crossing for two tries.

But it wasn’t long before Hornsby had levelled the scores at 12 all.

Warnervale crossed for a third try late in the first half to make the halftime score 17-12.

In the early and mid stages of the second half Warnervale skipped away on the scoreboard, posting a further 18 points before Hornsby was able to respond with two tries.

Best players for Warnervale were No.8 Tevita Piukala and hooker Cameron McNamara.

The Lakes had their first match at home this season at Slade Park, defeating Gosford 35-20.

The Lakes crossed for three tries to one in the first half to take a 17-10 lead at the halftime break, confirming their dominance in the early stages of the second half by posting 13 more points to jump to a 30-10 lead.

Gosford never stopped trying and was rewarded with two tries late in the match.

Woy Woy has withdrawn from the Premier 1 competition for the remainder of the year and will play lower grades only due to player numbers.

The Bay President’s Cup team was defeated by Avoca Beach at Heazlett Park, going down by 36-0.