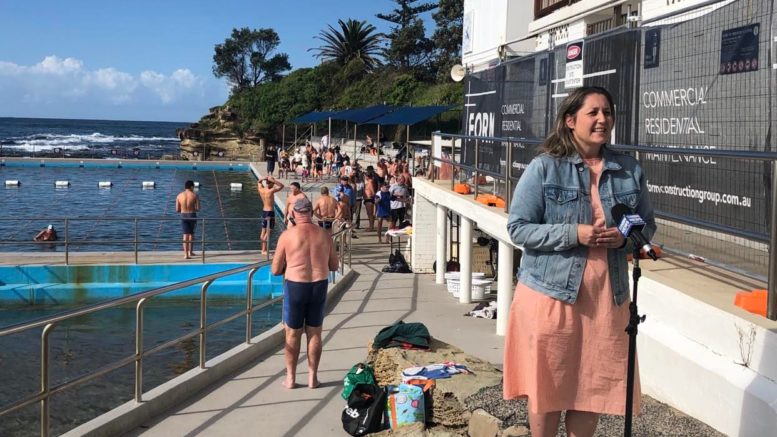 Emma McBride announcing the commitment at The Entrance Ocean Baths

Shadow Assistant Minister for Mental Health and Federal Member for Dobell, Emma McBride, says a Labor Government will invest $1.2 million to bring life back to The Entrance if it is elected.

Speaking at The Entrance ocean baths, McBride said The Entrance was in need of significant investment to “breathe life back into area” in the future.

“The Entrance is much-loved by our community, but the town needs a little TLC,” McBride said.

The Entrance Ocean Baths are an iconic heritage listed site that have been popular on the Coast for generations.

“This investment will improve water quality at the Baths by upgrading the pipes and pump system, so locals and visitors can swim safely and comfortably all year round,” McBride said.

As part of the promised upgrade, Labor said it will spend $40,000 to install shade sails at the Baths’ grandstand seating, and another $100,000 for the clubhouse.

“Labor will invest $250,000 for a Baker Park Masterplan, which will help map out planning works and the future of the grounds,” McBride said.

McBride said she had previously worked with the community to save land at Baker Park from being sold off and was a proud patron of Wyong District Netball Association.

“Baker Park has a special place in my heart – I grew up playing netball and tennis there, and it’s much-loved by our community,” she said.

“This project is shovel ready and will be a major boost to the club and its players.