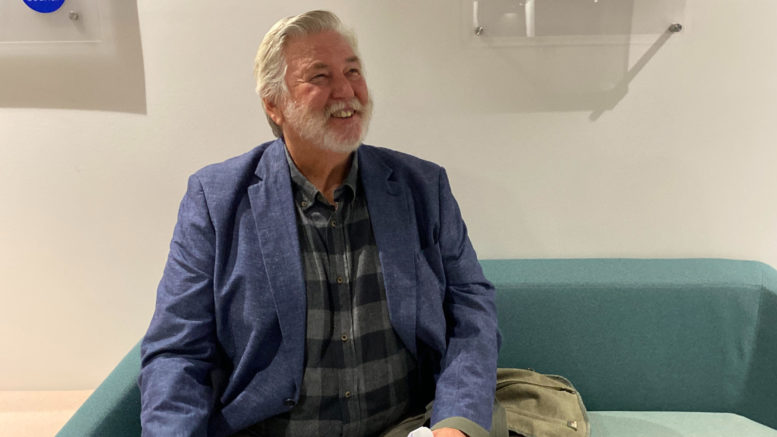 Blaschke waits to speak at the Council meeting.

Council has adopted the Greater Lake Munmorah Structure Plan (GLMSG) despite a last minute plea from resident Gary Blaschke for a moratorium on all proposed developments in suburbs near coal ash dams.

The plan was deferred in April 2020 due to concerns about the location and width of a biodiversity corridor.

The latest version has been amended to reflect the most up-to-date layouts of the various Planning Proposals that have been lodged within the study area, Council said.

By that, it means it was aware of the rezoning proposal for 600 homes recently submitted to the State Government.

Darkinjung Local Aboriginal Land Council (DLALC) has applied to the Department of Planning to rezone land located on the northern side of the Pacific Highway, about 300m north east of the intersection with Elizabeth Bay Drive.

“The Greater Lake Munmorah Structure Plan establishes a framework to guide the future growth of the study area from 8,407 people to approximately 15,000 people, over a 20 year period,” the executive summary of the plan states.

“It is guided by a vision that aims to support sustainable growth and has been developed through significant analysis and stakeholder engagement.”

It takes in the suburbs of Lake Munmorah, Kingfisher Shores, Doyalson North, Chain Valley Bay and a small area of Crangan Bay.

The Structure Plan has been named “Greater Lake Munmorah” due to the suburb of Lake Munmorah being the largest and most prominent within the study area, council said.

Resident Gary Blaschke addressed the Council-under-administration meeting on April 26, urging Administrator Rik Hart to call a moratorium on all proposed developments in suburbs close to or near coal ash dams until the appropriate health studies were conducted and the results published.

“The current communities within the impact zones and new residents to the region will find this council’s response, if approved or supported, to be morally irresponsible and potentially illegal,” Blaschke said.

“The plan is only one of many similar proposed plans that have been looked at in total isolation and simply not considering the cumulative impacts of all other plans for the future in this region, part of a development melanoma destroying our way of life and welfare,” he said.

“It is a state government driven plan that intends to have the Central Coast as part of its proposed mega city.”

He said he sent a 28 page objection outlining his concerns in April 2019 but has had no further correspondence with Council.

He said the region was heavily impacted by health issues ranging from multiple chronic health conditions to life-threatening asthma, with a recent legislative council public-works committee finding the immediate need for epidemiological assessments and or health risk and exposure assessments  to be conducted by December 2022.

He said the same government inquiry into coal ash dams found that the responses by both NSW EPA and NSW Health had demonstrated a complete disregard by the government towards the health of its citizens.

“It is obvious that the further you live from these hotspots the health conditions reduce dramatically with Avoca Beach being 8% or Sydney’s Parramatta at 3.5% of the population.

“The matter of some proposed 51,219 new homes for the northern regional loan is simply unsustainable, equating to a further 130,000 new residents for this region, with the local infrastructure unable to handle the impact,” he said.

Administrator Hart, in a press release after the council meeting, said the draft GLMSP had undergone extensive consultation with both internal and external stakeholders.

“The result is a robust plan that will assist Council in meeting the population, dwelling and employment targets, as set by the Central Coast Regional Plan,” he said.

“The GLMSP also refines the precincts identified within the North Wyong Shire Structure Plan (NWSSP) and provides guidance for the future development of the area.”

Mr Hart added that the GLMSP will not amend any land zonings or development controls.

“Following adoption, any rezoning to facilitate the outcomes of the GLMSP will be required to be landowner-funded in accordance with Council’s Planning Proposal Procedure and relevant fees and charges set in Council’s adopted Fees and Charges,” he said.

“It is anticipated that this Contributions Plan will be exhibited in late 2022 and in place early 2023.”

Mr Hart said with the adoption of the GLMSP, the document will now be made publicly available on Council’s website.

The State Department’s Executive Director of Local and Regional Planning Malcolm McDonald said the community could help shape Lake Munmorah’s growth, by sharing its views on the DLALC project.

“Showcasing this proposal to the public represents a significant milestone in Darkinjung’s journey, to use its land to reap economic rewards for local Aboriginal people and deliver much-needed new homes,” Mr McDonald said.

“The 55-hectare site lays the foundations for a new park and up to 600 homes at various price points, close to existing services and jobs, not just for the Traditional Owners but everyone on the Central Coast.

“The proposal balances development with environmental conservation by protecting 21-hectares of untouchable bushland, home to wildlife such as the masked owl.”

The DLALC is the largest non-government landowner on the Central Coast and is one of 120 Local Aboriginal Land Councils in NSW.