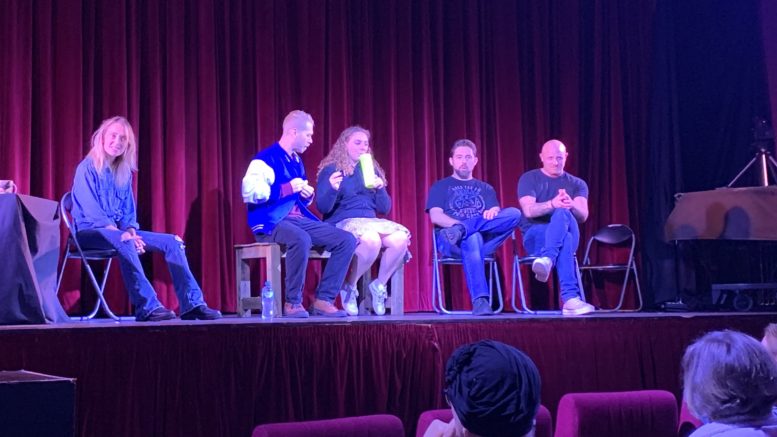 Play director, actors and writer at the Q&A held after the show.

A confronting play about the culture of sexual violence in Australia was held at Avoca Beach Theatre on Tuesday evening May 17 and the assembled audience jumped to their feet, not to applaud but to shout out their outrage.

The original theatre play ‘Rape and other acceptable practices’ premiered previously at The Art House in 2021 before heading off on a tour to a handful of locations around NSW and the ACT.

Written Dr Daniel Widdowson and directed and Sylvia Marie Keays, both Central Coast locals attached to the Salt House Creative Studio in Kincumber created the work based on a series of discussions with assault and rape victims.

The show is primarily a commentary on unacceptable social problems which include sexual assault, gaslighting, silencing victims, and victimising perpetrators.

The one-act minimalist production explores themes not usually discussed openly in public and includes scenes that depict rape, abuse, and speaking out, touching on themes of abuse of power, mental health, a duty of care, trust and support and consequences for families.

Actors Claudia Shnier, Peter Maple and Callum John Hayes pull off a compelling and professional performance about a topic we all don’t really want to discuss.

Yet, by the end of the one hour show, the actors cleverly ask the audience to be part of how the show concludes.

This is confronting theatre that will make your blood boil one moment and cry the next.

The performance was followed by a Q&A discussion with the actors, director and playwright.

Audience members bought forward excellent observations as well as some harrowing stories of being caught in situations, not unlike the scenes in the play.