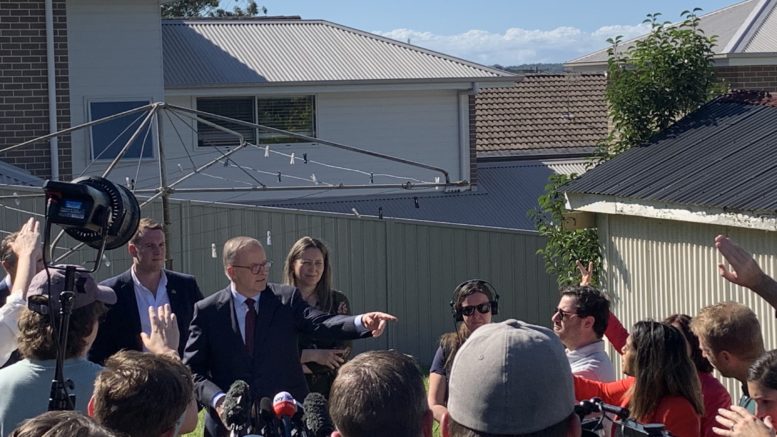 Labor leader Anthony Albanese fronted a media pack of over 40 reporters, journalists and camera people in a cramped backyard on the Central Coast to pitch his federal equity loan scheme today.

The home at East Gosford was the rental property of a young couple who reportedly stretched to pay the rent and save for a home.

The homebuyer will need to have a deposit of 2 per cent and qualify for a standard home loan with a participating lender to finance the remainder of the purchase.

The large media pack was guided into the backyard of the modest suburban property to set up while the Labor leader discussed the scheme inside the house of the young couple.

When Mr Albanese and his colleagues emerged from the home they seem genuinely surprised to see so many people in the backyard complete with a tangle of cameras, boom microphones and lights.

After a brief welcome by local Labor candidate Dr. Gordon Reid, Mr Albanese explained the housing equity scheme to the media and why it was part of the Labor policy scheme.

Jason Clare said the biggest drop in home ownership is amongst Australians on low and middle incomes who have been forced to give up on the great Australian dream.

According to Clare, figures from the Grattan Insitute forty years ago, almost 60 per cent of young Australians on low and modest incomes owned their own home – now it is only 28 per cent.

Under the ALP plan, homebuyers will also avoid the need to pay Lenders Mortgage Insurance (LMI), representing an additional saving, depending on purchase location, of potentially more than $30,000.

During the loan period, the homebuyer can elect to buy an additional stake in the home when they are able to do so.

The homebuyer will not be required to pay rent on the stake of the home owned by the Federal Government.

Clare said the scheme will be available to Australians with a taxable income of up to $90,000 for individuals and up to $120,000 for couples who are be Australian citizens and do not currently own or have an interest in a residential dwelling.

He said Help to Buy is forecast to make money for the Government as the Federal Government will recover its equity and its share of the capital gain when the house is sold.

Albanese also responded questions on the details of the proposed scheme.

“This will help 10,000 people a year, a practical scheme that comes at the cost of around $329 million over the forward estimates, but will recoup $445 million from our plan to double foreign investment fees and penalties.

“This is a practical plan which is why its been supported so strongly by the House Industry Association, by the Master Builders [and] its operated effectively in West Australia for some thirty years..”

“After nine long years in Government, housing affordability has only got worse under the Liberal-National Government.”

Clare also pointed out that an eventual Labor Government will also establish a National Housing Supply and Affordability Council, to ensure the Commonwealth plays a leadership role in increasing housing supply and improving affordability.

The Council will set targets for land supply, in consultation with States and Territories. It will also collect and make public nationally consistent data on housing supply, demand and affordability.