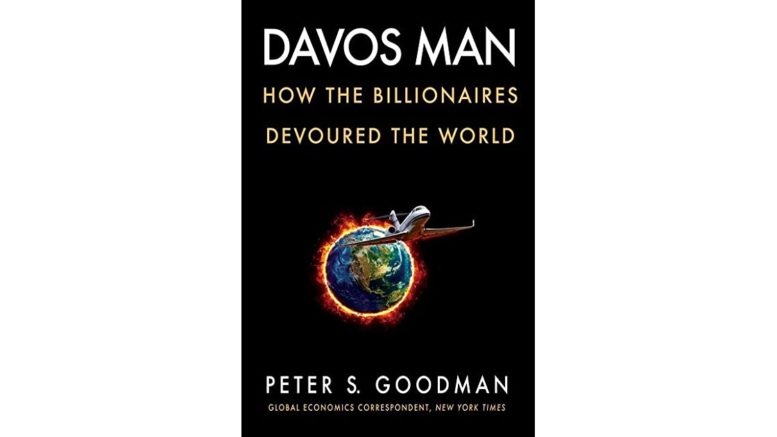 I heard about this book while listening to ABC radio.

Peter S. Goodman is a global economics correspondent at the New York Times and has worked for the Washington Post, Huffington Post and International Business Times.

Davos Man is a term coined in 2004 by Samuel Huntington, a political scientist. It stands for “those so enriched by globalization and so native to its workings that they were effectively stateless, their interests and wealth flowing across borders, their estates and yachts sprinkled across continents, their arsenal of lobbyists and accountants straddling jurisdictions, eliminating loyalty to any particular nation.”

Generally, anyone that attends the Davos Forum.

But he will also comment on the Forum’s founders, Klaus Schwab, Bill Clinton, Emmanual Macron, Steven Mnuchin, Mitch McConnell and George Osborne, “each of these figures has aided Davos Man in pursuit of fresh prey while helping himself to choice morsels”.

While much of the book is about the destruction Davos Man has done to the United States, attention is also drawn to the United Kingdom, Italy, France and Sweden.

How, under the guise of do-gooders, billionaires are depleting the world to line their pockets.

Banners at the forum claim the mission is, “Committed to Improving the State of the World”, while behind the scenes, “It is the largest lobbying operation on earth.

The most powerful people gather together behind closed doors, without any accountability, and they write the rules for the rest of the world.”

Goodman uses the term “Cosmic Lie” often in the book and states that it means “the alluring yet demonstrably bogus idea that cutting taxes and deregulating markets will not only produce extra riches for the most affluent but trickle the benefits down to the lucky masses-something that has, in real life, happened zero times”.

While the pandemic claimed lives and livelihoods for many, Davos Man “feasted on the calamity, snapping up real estate, shares of stock, and other companies at distressed prices.

They applied their lobbying muscle to turn gargantuan, taxpayer-financed bailout packages into corporate welfare schemes for the billionaire class.” All the while taking credit for “rescuing humanity.”

Bezos kept Amazon running while putting his workers at risk.

They have decimated health care and then patted themselves on the back when procuring protective gear, “If the agony of 2020 had demonstrated anything it was how the rich could not only prosper but profiteer off everyone else’s suffering.”

I think the prologue of the book is great and really made me angry with the state of the world and despondent that there seemed to be no way to stop it, nobody that couldn’t be bought off.

It is a well-researched book with an important message and Goodman gives many examples to underscore his point.

The solution, according to Goodman, “can happen only through the exercise of democracy – by unleashing strategies centred on boosting wages and working opportunities, by erecting new forms of social insurance, by reviving and enforcing antitrust law, and by modernizing the tax code to focus on wealth.”

Perhaps it’d be enough to just take the assets off the five specimens – just like we did with those Russian Oligarchs.

(I mean aren’t these guys Global Oligarchs? Doesn’t that word have an evil ring to it now?)

I think this book will appeal to a vast cross-section of readers. It was a little too much for me – about a third of the way through my interest waned and I found myself playing Wordle instead – but I wouldn’t let that deter you.

Oh, and in case you want to buy this book this book, it is available on Amazon – Jeff B sends his regards.