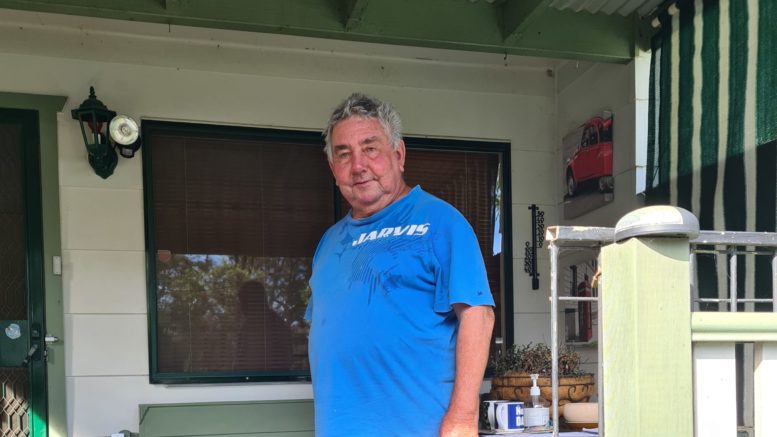 David Lowe at the Bluehaven Flooding

The recent rain bombs have left Bluehaven resident David Lowe tired and despondent as repeated flooding, which he blames on inadequate drainage on a block owned by Transport for NSW, hits his home.

Lowe’s home on Allambee Crescent is adjacent to a large block owned by Transport for NSW.

Backing on to Wallarah Creek and sitting on the west-side of the narrow Pacific Highway bridge that links Doyalson and Charmhaven, Lowe explains that the block has been owned by Transport for NSW for at least 20 years and was acquired as a potential spot for a new bridge.

Over the past four years, however, Lowe has witnessed water pooling during heavy rains on the Transport for NSW block before rising and following a path that leads it to the lowest point under his home, through his workshop/garage and occasionally into his neighbour’s home.

During these last rains, his workshop/garage was completely flooded for days.

Transport for NSW has outright rejected that it is responsible for the pooling of water on the block and therefore any flooding that occurs in Lowe’s, and his neighbour’s, homes.

After two years of inaction, Lowe complained to Member for Wyong David Harris and the NSW Ombudsman.

Transport for NSW advised it sent out a crew to review the site, even though Lowe believes no-one ever turned up.

What followed was back-and-forth correspondence between the two parties, with Lowe attaching photographs of the flooding.

Ultimately, both parties have reached a stalemate, with Transport for NSW outlining in a letter that “(It) does not change out initial position on this matter, which is that any flooding to your property is not the responsibility of Transport.”

Matters have been further complicated by Transport for NSW’s claim that the removal of a tree on its site, at the request of Lowe, may have resulted in increased flooding, as too did the construction of a Council-approved shed on Lowe’s block.

Lowe is at pains to point out that responsibility for the tree, and for the effects of its removal, lays with Transport for NSW, while the shed is at least four metres from the site of the water pooling and would therefore have no bearing on the floods.

He is also taken aback at some of what he calls “excuses” put forward, such as “the land in the area is very flat, and it is natural for water to pond in low lying areas in very heavy rains.”

“It is incredulous that anyone would believe that water would pool to the extent it has on flat land,” he said, and that the “sink hole,” as he calls it, would not cause a build-up of water that seeks out the lowest point.

“We watch it ourselves, every time it rains.

“The sink hole fills up, reaches capacity and overflows down, under our house, through into our workshop, where it gathers, and then sometimes through to our neighbour’s property,” Lowe said.

Lowe said he does not know where to turn.

“Transport for NSW has told me that they won’t respond to any more correspondence, that the matter is closed as far as they are concerned, and that it is my problem.

“They have even suggested that because there is no kerb and gutter on our street, and because we are next to the Creek, that this is actually an issue for Council,” he explained.

Correspondence from Transport for NSW has been very clear that the problem is a matter for Council.

“The land is very flat and all surface water from the north of your property would flow onto 59, 60 and 61 Allambee Crescent, then into Wallarah Creek behind your property.

“As such and as Allambee is a local road, this would be a matter for Central Coast Council for their consideration and direct response,” it said in a letter to Lowe.

Lowe says he can demonstrate through photographs and videos that the water’s direction of travel is from the Transport block on the east through to his home and beyond.

“I don’t know where to turn now … I went back to Mr Harris and he recommended I speak to someone in the media,” he said.

“So, here I am now hoping that this will lead to a proper site analysis and a constructive conversation about how Transport can undertake some site drainage.

“All they would have to do is construct a trench and some guttering that leads the water back down to the Creek – I would do it myself, but I’ve been told I could be fined … it’s beyond ridiculous.”