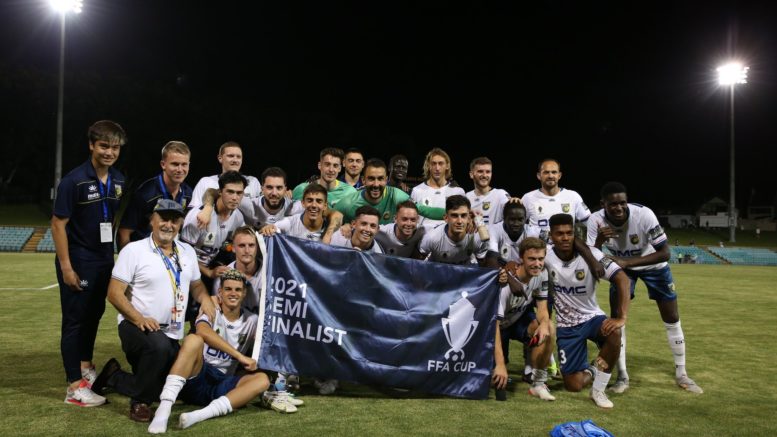 The Central Coast Mariners have catapulted themselves into the FFA Cup semi finals with a commanding nil – six victory against a gallant APIA Leichhardt FC at Leichhardt oval on Tuesday night.

The victory by the Central Coast Mariners, (6-0) was the greatest winning margin in FFA Cup history. The result surpasses a 7-2 victory by Sydney FC and 5-0 wins against Palm Beach FC.

Satisfaction will be had for Head Coach, Nick Montgomery in knowing that five of the goal scorers are players that he has brought into the first team this year: two of which are international signings and two more being Academy products.

A number of ex-Academy players earning their debuts within the game day squad, it only took eight minutes for Max Balard to find the lead with an accurate, out-swerving ping from beyond the penalty area – a first for the young man in the top squad.

In the 24th minute, the lead doubled with a debut goal for Dan Hall, giving to the Mariners a cushioned half-time lead.

For Kuol, a debut goal was the perfect way to follow in the promising footsteps of his older brother, Alou, an ex-Mariner who continues his inaugural season in Germany with VfB Stuttgart II.

Although this time taking more than 25 seconds to score after entering the field, as was the case in his debut game last season in March this year, the distance and acute angle of the strike will naturally lead to it being considered in the running for goal of the season.

Now, the Mariners face one more challenge to bookend 2021, their Match Week Six contest against Wellington Phoenix to be played at Central Coast Stadium on Monday, December 27.