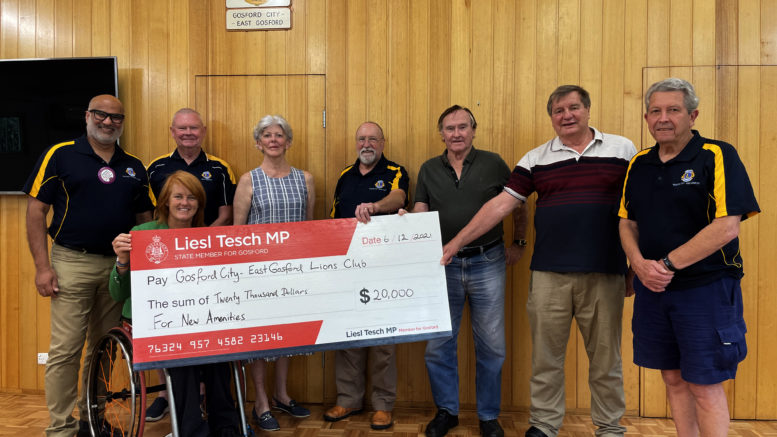 Member for Gosford, Liesl Tesch, with members of East Gosford Lions Club and The Makers Studio

East Gosford Lions Club will install new bathroom amenities at its hall which will be accessible to other community groups after being awarded $20,000 through the 2021 Community Building Partnership (CBP) program.

The program requires applicants to submit detailed information of their requests, which is followed by their local MP’s approval and then assessed by an independent panel.

Member for Gosford, Liesl Tesch, said the development is a long-awaited and much-needed new facility for Lions Club members and the wider community.

“In true Lions Club spirit it is brilliant to see the members not only thinking of themselves in their proposal but also of their neighbouring volunteers like those who are members of The Makers Studio,” Tesch said.

“It’s a real testament to the values the Lions Club shares and I could not be prouder to have granted my approval to their submission.”

The new amenities will allow for The Makers Studio Central Coast – a group made up of artists and artisans from across the region – to be self-sufficient, no longer needing to access the hall for the facilities.

“The hall actually has toilets, but if someone is using the hall those toilets are a part of the hire meaning we can’t get access to them,” she said.

“The Lions have a meeting room with a bathroom, which we can access on the outside of the building.

“But when the weather is really bad or we need to use it at night it does not always feel that safe.

“The installation of these toilets means it will be much easier for us and feel much safer and we won’t have to inconvenience anyone else.”

Lions Club Hall Committee Chair, Glenn Triton, said the new facility has been a priority for many years.

“The new bathroom for The Makers has been one of our priorities for many years and we are delighted to now have the financial capacity to build the new facility,” Triton said.

“The ongoing support of Liesl Tesch is greatly appreciated by the Lions Club and we will move quickly to have the new amenities constructed.”

The Makers Studio member, Leah Bennetts, said the move gave a sense of optimism to the group.

“We really appreciate the funding because the arts are often overlooked,” she said.

“At the Makers Studio the members are predominantly women of all ages.

“Our whole mentality is to learn and feel happy and comfortable and it is so much more than just a creative outlet, it is a social outlet too.”