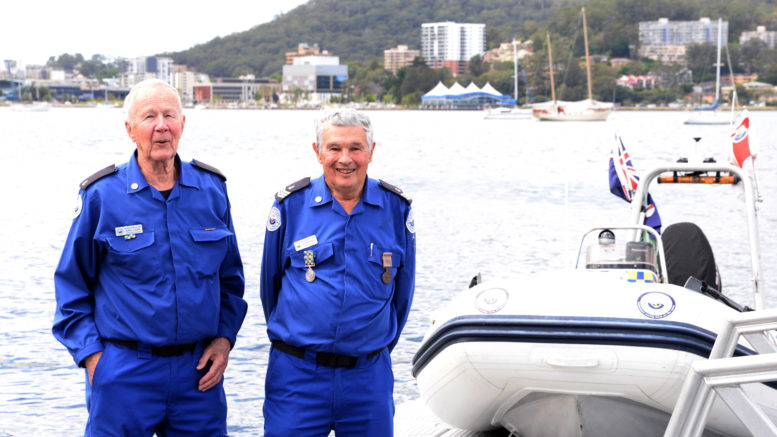 Alan Howes is 79 and Karl Liepa is 81, but that hasn’t stopped the two Marine Rescue Central Coast volunteers continuing to make a valuable contribution to the community.

The men recently received long service awards – each notching up 20 years of service with Marine Rescue at a time when many others are content to sit back and relax.

Howes joined the then Royal Volunteer Coastal Patrol (now Marine Rescue NSW), in March 2001, after a career in the printing industry.

On the boating front, he was a regular driver in the annual Bridge to Bridge on the Hawkesbury River before downgrading to slower tinnies which were better suited to fishing and mid-week jaunts with his fellow members.

He applied those skills to being a coxswain on rescue vessels and continues to assist new members at the Marine Rescue Central Coast unit in the art of boat handling.

Approaching his 80th birthday, the great grandfather still plays an active role on his regular weekend watch at the unit.

Liepa joined in September 2001, and soon achieved his crew rating.

Following an engineering apprenticeship with Qantas, he eventually moved on to TAFE as a lecturer in automotive engineering.

“These skills have proved invaluable at the unit on many occasions, and when a problem arises with the vessels, the standard comment is ‘ask Karl’,” a Marine Rescue spokesperson said.

“Karl is skilled on knots and rope work, and despite nearing his 82nd birthday, still sets an example to all members by his willingness to attend to odd jobs around the base.

“The Marine Rescue Central Coast unit and the local boating community are fortunate to have the benefit of these two stalwarts, who continue to serve their local community with energy and enthusiasm.”

The past 18 months have seen the training department conducting compliant and approved training, during the week and on weekends.

The efforts have been spread across the Point Clare and Terrigal Haven bases, and have resulted in the ranks expanding by 25 rated members, including two coxswains, eight leading crew, nine crew, three radio operators and one watch officer.

In addition, there are four coxswains based at The Haven base waiting on RPL assessments for coxswain ratings.

New members have come from a mixture of retirees and full-time workers; one of them is a Qantas A380 captain during working hours, and a newly minted coxswain on weekends.