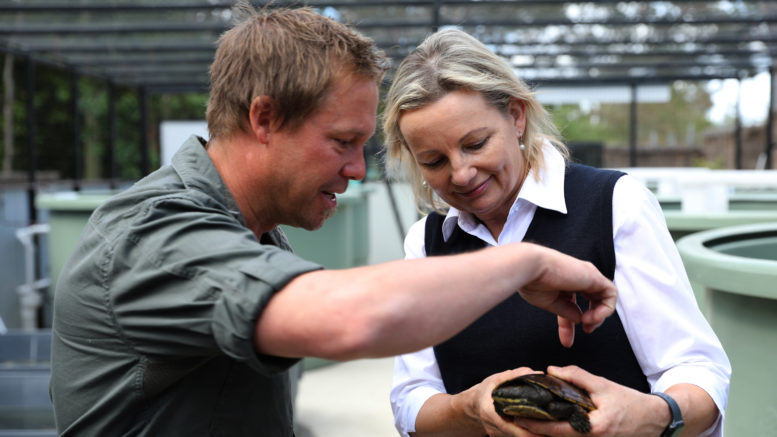 Giant Barred Frogs, Manning River Helmeted Turtles and Stuttering Frogs will be the first tenants at Conservation Ark, a new conservation and recovery facility for endangered wildlife which was officially opened at Somersby on November 3.

Opened by Aussie Ark, in conjunction with the Australian Reptile Park and with $850,000 in Federal Government funding from the Wildlife Rescue and Rehabilitation Program, Conservation Ark will breathe new life into bushfire-affected species.

The opening honours went to Environment Minister, Sussan Ley, who said the facility would provide a new home for the Giant Barred Frog and Stuttering Frog, and expanded breeding facilities for the Manning River Helmeted Turtle.

“Whilst we understand that Council was in financial difficulties it appears that the Water, Sewer and Stormwater funds were caught up in this issue despite having their own separate income and having to re-employ staff within a year of these redundancies does not appear to be a proficient way of running a business,” the resident said.

“This investment (means) that these four species, which were severely impacted (by bushfires) in the Central Coast region, will have the best chance at recovery.

“We love the partnership that we have with Aussie Ark because we know that, as a conservation organisation, they understand what to do and how to do it best practice,
with the best science to give the animals the best
chance at recovery.”

“Bushfires roared through Yengo and Dharug national parks in the Central Coast region, as well as the nearby Wollemi national park, devastating communities and Australian wildlife and habitat,” Wicks said.

“I know there’s a lot of excitement in the community about the official opening of these facilities.”

Conservation Ark will serve as an extension of the Australian Reptile Park.

“We hope that in the coming years we will be reporting to our community about incredible breeding seasons, births and of course the return of these animals to the wild,” he said.

Conservation Ark will provide a collection of endangered or threatened wildlife breeding programs including for Australian freshwater turtles, endangered amphibians and koalas.

Best known for its work with the Tasmanian devil, Aussie Ark also has plans to expand to other endangered species including the Broad-toothed Rat and Squirrel Gliders.

Entry to Conservation Ark is included in the ticket price for the Reptile Park.

The investment in Conservation Ark is part of a $200M commitment from the Federal Government to help native wildlife and their habitats recover from the devastating impacts of the Black Summer bushfires.