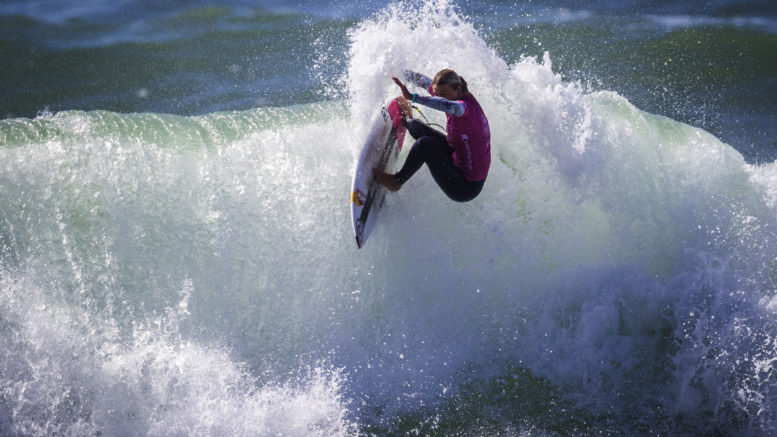 The Challenger Series continues with the Vissla Pro Ericeira in Portugal, and the Central Coast’s Molly Picklum and Wade Carmichael have so far advanced to the second round of elimination heats.

Avoca Beach’s Macy Callaghan has been eager for her opening heat in the women’s Round of 42 and was expected to compete throughout Tuesday, October 5 (GMT+1).

On the opening Sunday of competition, Carmichael from Avoca Beach was able to earn second place in Heat 17 to advance into the upcoming Round of 48.

Showing the most early energy, the sole Aussie surfer was the first to complete a wave, taking the lead with a 5.33 on his second attempt.

From here, the lead changed multiple times; first with a 5.43 for France’s Kauli Vaast, a 5.93 for Peru’s Miguel Tudela, and then a two-wave total of 9.53 for Brazil’s Lucas Silveira.

Carmichael showed the most prudence in his wave selection, eventually committing to a fourth attempt and scoring a new heat best of 6.27.

The wave was well selected, offering up extra height and allowing the naturally built surfer to generate power in his forehand turns.

Now, he will face Narrabeen surfer, Cooper Chapman in Heat 10 of the Round of 48, along with Brazilian Caio Ibelli and American Crosby Colapinto.

A clear win came the next day for Shelly Beach surfer, Molly Picklum, her first in this four stop Challenger Series.

Despite being the sole competitor from the Southern Hemisphere in the third women’s heat of the day, Picklum was not shy about breaking away from French surfers, Maud Le Car and Juliette Lacome, and Nadia Erostarbe from the Basque Country.

The Spanish surfer was the first to lead the scoreboard with a couple of quick and decent waves, but it was Picklum who set herself apart with a heat high score of 7.67 on her second attempt.

The wave was started with a graceful forehand line to the right, continued with a long line of quick turns that brought Molly precariously close to large rock sticking out in the white water.

With the lead intact, Picklum searched for a second wave to match her first, getting closest with her fourth and final attempt scored at 7.10.

A similar start to the wave was cut short due to a lack of action in its middle section, but it nonetheless launched Picklum beyond her competition who were all unable to reach double digits with their two wave scores.

The win has earned her a spot in Heat Two of the Round of 32 where she will again be the only Australian in the surf.

However, three further Australian women have also made the next round alongside Molly, with the potential for four more, including Callaghan.

“A few of the boys and girls are all staying together at the Rip Curl house just up the road,” Picklum explained.

“We’re all kind of vibing off each other and we’re stoked every time an Australian makes the heat.

“I did spend a bit of time here before the comp because it’s my first time and I love this place, it’s super pretty.”

It was a slow start for Molly and Wade in this season’s Challenger Series; both experiencing opening round elimination at the first stop to Huntington Beach in September.

Now facing more ideal conditions in Portugal, these two – as well as Macy – will fancy their chances at the 10,000 Championship Tour qualification points given to the victors.