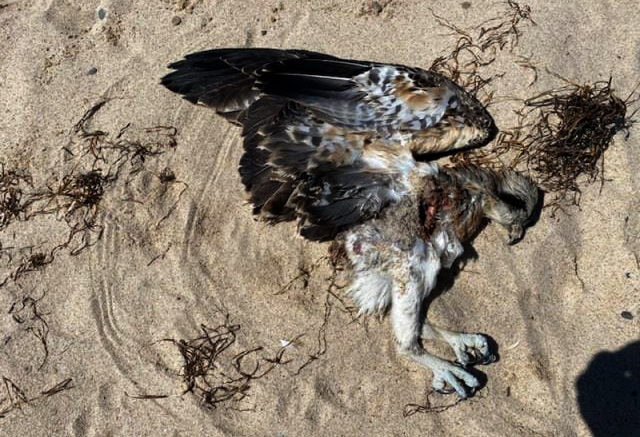 A bird fallen victim to poisoning

Two adult Eastern Ospreys have been found dead at the base of their nest tree, as well as another young bird at a different nesting site, at The Entrance.

Allan Benson, of Central Coast Birding NSW, said nature lovers have been saddened by the news of the dead birds.

Bodies of the two adult Eastern Ospreys were found at the base of their nesting tree, a Norfolk Island Pine, near The Entrance bridge.

The body of the young bird was found near the Little Tern nesting site at The Entrance North.

“Botulinum toxin is produced by a bacterium and the spores of this bacteria are eaten by fish.

“The fish are then consumed by birds such as pelican and cormorants and most likely in this case, the Ospreys.

“Further evidence that this is most likely the cause of death is that at this time Seabird Rescue volunteers are caring for a pelican suffering from this condition.”

“Unfortunately, because of the state of the bodies of the birds a necropsy is not possible so the cause of death will not be able to be determined,” he said.

Police have been informed and anybody with any information is urged to contact Tuggerah Lakes Police.

There were seven nesting pairs on the Coast – four around Brisbane Waters and three around Tuggerah Lake.

Twenty years ago, Ospreys were rare on the Central Coast but have gradually increased their numbers over time by breeding successfully and is testament to the healthy state of both Tuggerah Lakes and Brisbane Water.

Ospreys feed exclusively on fish which they catch by plunging into the water.

Established artists share their platform for Voices of the Land