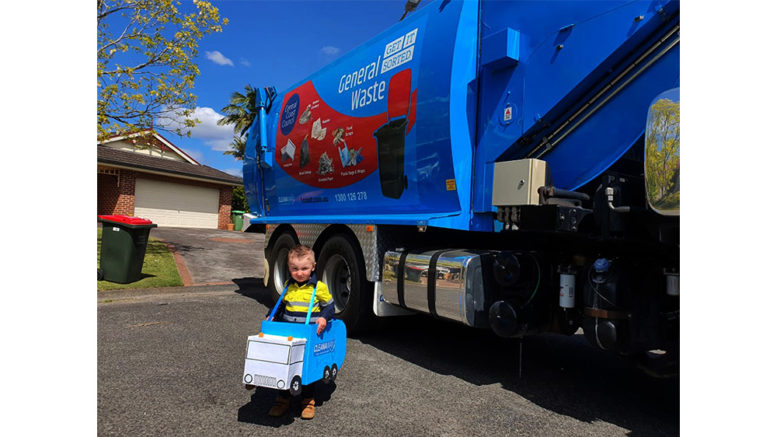 For Cleanaway driver, Mick Skillicorn, a highlight of his working week is the regular Wednesday round at Kariong.

Each week, Skillicorn is greeted by two-year-old Bodhi Bennett, resplendent in his very own Cleanaway uniform, complete with attached truck.

Bodhi’s Mum, Belle Bennett, said the little boy had first become intrigued by the weekly garbage collection at the age of 10 months.

“We have a balcony and every Wednesday he pulls up his table and chair and eats breakfast as he waits for the garbage truck to arrive.

“He used to go to day care on Wednesdays, but since lockdown began, he has been there looking out for the truck every week.

“It’s just something he has always been really interested in.

“Of course there are two pick-ups every week.

“The (fortnightly yellow and green) bin collections are done at different times but Mick does the red bin collection every Wednesday between 11:15am and 11:50am, so Bodhi knows just when to look out for him.

“He definitely has a connection with Mick.”

Bodhi sometimes waits three hours for the truck to arrive so he can wave to Mick as he passes by.

Each week when he sees the truck approach Bodhi alerts his mother, who is deaf.

“He tells me in Auslan that the truck is approaching,” Bennett said.

“This year we had a garbage truck themed birthday party for him.

“It was during lockdown so it was just the family, but I made him his own little outfit, complete with a truck which actually opens at the back so he can put garbage in it.

“He absolutely loves it.”

Skillicorn, a 22 year veteran of the waste industry, including three years with Cleanaway, looks forward to his weekly distanced greeting from Bodhi.

“The first time I saw him dressed up I thought wow, how good is this?

“I have two boys; they’re grown up.

“I just love to see the customers and the joy that going around emptying the bins brings to the kids.

“I suppose it’s like Christmas every week to them.”