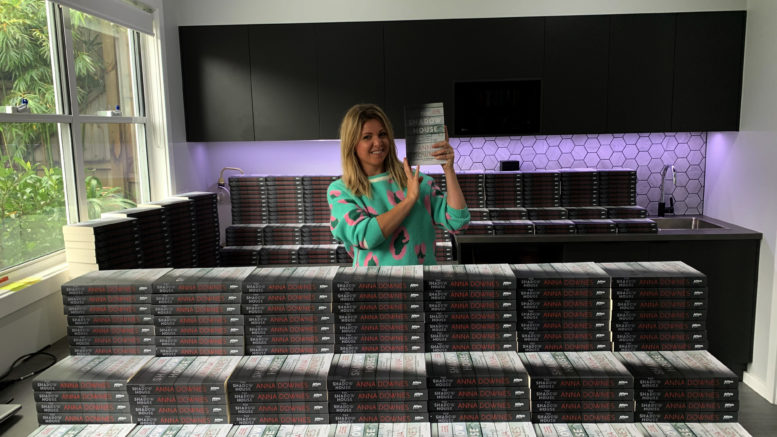 Anna Downes with copies of her latest book, The Shadow House

Following the success of her first novel, the Safe Place, which was set largely in France Wamberal author, Anna Downes, decided to look a little closer to home for the setting of her second book.

The Shadow House, to be released on September 28 by independent publisher Affirm Press, might ring some bells with those familiar with Narara Ecovillage.

“It’s important to make it clear that the book is not set at Narara Ecovillage but they have been wonderful helping out with research,” Downes said of the novel, which is a gripping thriller about a single mother fleeing an abusive relationship who seeks sanctuary in an idyllic ecovillage.

“I had done a first draft of the book, but what was missing was a sense of place,” she said.

“One of the characters had a dream of establishing an ecovillage so I decided to look for one locally to provide inspiration.

“I took an Open Day tour at Narara Ecovillage and was struck by the tight-knit community in a beautiful setting which was really creative about sustainability.

“It was the perfect inspiration for the setting of my novel which actually takes place in an ecovillage built over farmland.

“It follows a woman who moves to the village with her children.

“Strange things start to happen and she discovers the same things happened to farmers who had lived at the site previously.

“She sets about finding out what happened in the past so she can protect her children in the present.

“I knew very little about farms and needed to do some research – and again I found the answer right here on the Coast.

“Dominello’s flower farm at Peats Ridge was wonderfully helpful in my research.”

With a degree in drama from Manchester University and three years of study at RADA (The Royal Academy of Dramatic Art) in London under her belt, Downes worked as an actress for four years in her native England, performing on the West End and in such TV shows as EastEnders.

“I found it was an unfulfilling lifestyle, full of anxiety and instability and decided I needed a break,” she said.

“I decided to cross experiencing a ski season off my bucket list and moved to the French Alps, where I met my husband, who is Central Coast born and bred.

“My first novel was inspired by a job my husband and I did together after that ski season as caretakers/housekeepers for a wealthy family on a beautiful but remote property.”

After arriving in Australia some 11 years ago, Downes worked for a number of years as a massage therapist but when she found herself the mother of two children she decided she needed a change of pace.

“I didn’t have an outlet for myself,” she said.

“My world revolved around the children but I needed to achieve something outside of motherhood.”

“I made a deal with my husband,” she said.

“I would give writing a real go for five years or so.

“If I hadn’t sold anything or been published in that time I would get a full-time job.”

Downes’s first book was hugely successful, being published in the US and the UK as well as in Australia and being translated into several languages.

It was Affirm Press’s number one bestselling crime debut of 2020.

“Writing a second novel is about proving your mettle,” she said.

Written largely at the kitchen table during lockdown, The Shadow House looks set to meet the brief.

She speaks dialogue out loud, workshops different options as if she’s in a rehearsal room, and road tests emotional states to see how they feel before describing them on the page.

“I do miss live performance … but ultimately I prefer writing because I can practise my craft any time I like; I don’t need anyone else to create,” she said.

The Shadow House will be released on September 28, available online from major book outlets.

The Case for Planned Retreat