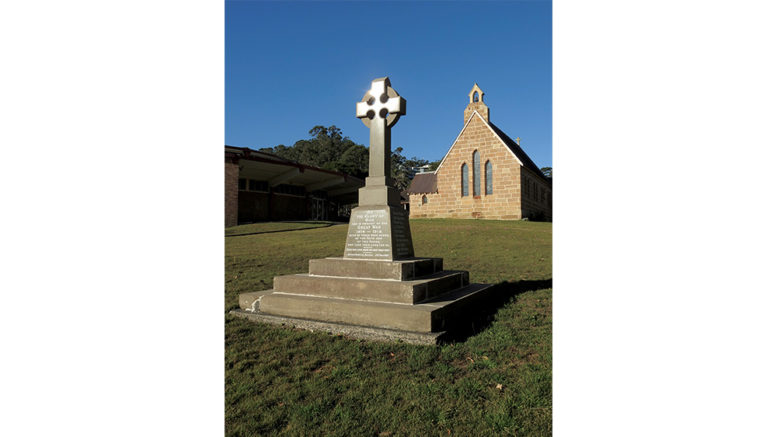 The Christ Church War Memorial in the grounds of the Gosford Anglican Church has been restored just in time for its 101st birthday on August 29.

Historian Merril Jackson said the memorial had been hidden beneath a build-up of moss, lichen, and pollutants, with the names illegible and mortar disappearing from the joints.

Restoration undertaken in 2021 was made possible by the Community War Memorials Fund supported by NSW Government Veterans Affairs and funded by the NSW Government.

Jackson instigated the restoration grant with the permission of Father Rod Bower and said she was delighted with the positive outcome of the restoration work undertaken by the Rookwood Cemetery Monumental Heritage Team.

“This local heritage item provides a tangible link to our past war history, and uniquely demonstrates the importance of faith on the home front during the First World War,” she said.

“This restorative work has ensured this monument’s endurance well into the future.

“The repainted lettering of each panel now clearly identifies the names of 30 soldiers known to the parish church.”

Jackson said she was confident the families of these soldiers would be proud and humbled to see that the Coast has not forgotten the sacrifices made.

With Rector Arthur Renwick, his wife Alice and the Church of England Women’s Guild raising the necessary funds, the war memorial was unveiled on August 29, 1920.

Created by Thomas Browne Monumental Masons of Maitland and Sandgate, it features a stone base sourced from Browne’s quarry in Ravensfield, with the pedestal and upper Celtic Cross crafted from natural and polished trachyte.

The Celtic Cross War Memorial was relocated to the front of the historic Christ Church (incorrectly referenced as St Mary’s Church) and now faces Mann St and Gosford Memorial Park.

The original timber Church of St. Mary the Virgin was demolished, with the current Anglican “round” church developed upon its original site.

The church, designed by Edmund Thomas Blacket and featuring hammer dressed stone, was originally constructed at East Gosford between 1857 and 1858, and reassembled in Gosford by mid-1906.