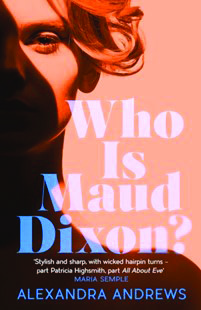 Florence Darrow grew up in Florida but she has “escaped” and moved to New York City to try to become a writer.

She works at Forrester, one of the big publishing houses and has befriended Lucy Gund.

Now Lucy has the kind of life that Florence wishes she could have.

Lucy grew up in Amherst and both her parents are professors at a college.

Lucy’s parents’ house is “down the road from Emily Dickinson’s ”… and full of books, it reeked of being intellectual. Quite the opposite of the apartment in Port Orange where Florence grew up with her Mum, Vera, a waitress at P.F. Chang. “

Above all, Vera believed with unwavering fervor that God had something special in store of her child.

It turns out that what Florence thinks is special is not the same as what Vera believes.

Florence and Lucy attend a work cocktail party and, after getting their drinks they try to mingle, but find it difficult as they only seem to have each other, not having befriended anyone else.

They stand near a group and hear an argument between two colleagues who are debating the sex of the writer Maud Dixon.

Maud had a very successful debut novel called Mississippi Foxtrot, but the identity of the author remains a mystery.

Maud has done no interviews or had any publicity of any kind.

When there is a mystery like this, people speculate, “Who is Maud Dixon?”

Florence leaves the cocktail party and will start a series of events that will change her life forever.

She will make some very unwise decisions which start with sleeping with editorial director, who is married, and end with her getting fired.

But as they say when one door closes …

She soon gets the job of a lifetime, being the assistant to none other than said author, Maud Dixon.

After signing a non-disclosure agreement, Florence goes to work for Maud at her house in upstate New York.

Besides Florence, the only other person that knows this information is Maud’s editor.

The house is isolated and the two will spend a lot of time with each other.

Helen will teach Florence how to cook, appreciate opera and fine wine.

Helen is a woman that Florence would like to emulate.

Florence will have full control of Helen’s correspondence, passwords to her emails and bank account details.

The two will fly to Morocco to do research for Maud’s new book where things will get wild.

The book is full of twists and turns and I did enjoy reading it but, man, the two main characters were just such awful people.

(You should know by now how I feel about books whose main characters I just don’t like.)

I felt torn about wanting anything good to happen to either of them.

Florence is willing to cut ties with her mother because she doesn’t fit into the life Florence sees herself having.

Maud has simply cut ties with anyone she ever known.

Is it really that easy to just cut everyone out of your life?

There are definitely holes in the plot which can become a little distracting but overall I have to say I still felt it was worth reading.