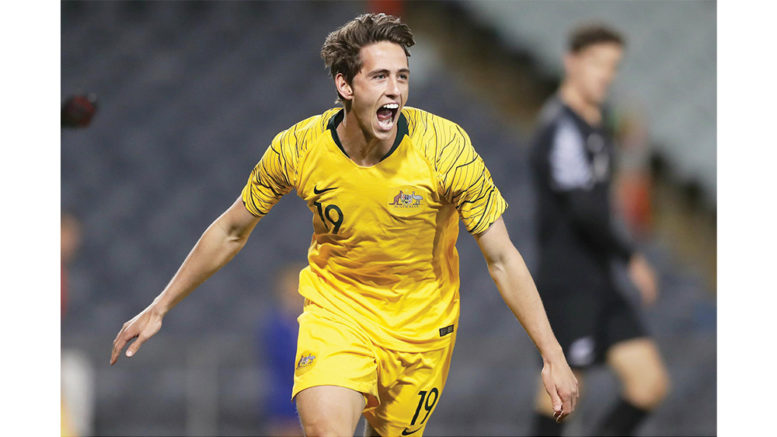 Whilst the Opening Ceremony is scheduled to begin tonight 9pm, the much delayed 2020 Tokyo Olympics is underway with Australia already tasting both the sweet and sour in pursuit of gold.

The Women’s Softball team were shown the mercy rule against a clinical Japan, whilst the Matildas marched to victory in a 2-1 win over New Zealand.

Central Coast’s Ellie Carpenter and Kyah Simon both started for the girls in gold.

Simon was formidable up front for the first 75 minutes of the game and made the second to last pass to Sam Kerr, who assisted Tameka Yallop in scoring the team’s 20th minute opening goal.

Kerr went on to score a second in the 33rd minute with a header from a corner, crossed in by Stephanie Catley.

Carpenter played with confidence in the right back position all game, making runs forward with precise crosses into the penalty area.

In the 65th minute, she prevented a certain goal by cutting out the final pass after Aussie keeper, Lydia Williams, was left absent from goal.

Despite a strong performance throughout the entire 90 minutes, one final loose pass led to a conceded goal in second half injury time.

The Matildas showed their ability to score goals both from loose play and set piece, although will need to make sure they can last the entire match for their two remaining group stage games.

Group G is this tournament’s group of death, wherein the Aussies will now face Sweden at 6:30pm AEST, Saturday July 24, then the USA on Tuesday July 27, 6:00pm.

Tonight (July 22) will be the Opening Ceremony at the Japan National Stadium from 9:00pm-12:30am AEST, only one hour ahead of Tokyo’s local time.

Other representatives from the Central Coast include Mariners and Aussie Men’s Football team defenders, Lachlan Wales  and Kye Rowles.

The Ollyroos will face a group stage challenge of similar difficulty to their female counterparts, first facing Argentina on Thursday July 22, Spain on Sunday July 25, then Egypt on Wednesday July 28.

Current Future Stars Athlete, Nicola McDermott will compete in High-Jump, going into the competition in the form of her life, holding both the Australian Women’s record of 2 metres and the new personal best of 2.01 metres.

The qualification round will be held on Thursday August 5, yet McDermott will be looking to save her best for the finals on Saturday August 7.

As well as this, two former Future Star Athletes with the CCAS, Matt Dawson in Men’s Field Hockey and Para-Canoer Dylan Littlehales, will both return for the second time to the Australian Olympics team, having each debuted at Rio in 2016.

Matt Dawson was eight when he started playing Hockey on the Coast, before moving to Newcastle and continuing his development of the sport.

After making his Australian National debut in 2014, Dawson was selected in the 2016 Rio team, as well as the 2015 and 2017 Kookaburra’s team for the World League Finals.

In 2018, an eye injury nearly caused Dawson to miss out on the Commonwealth Games, but a swift recovery allowed him to play with protective eyewear and he went on to score in the team’s winning final against New Zealand.

For Dylan Littlehales, this is also his second Olympics after competing in the Para-Canoeing at Rio and finishing six in his semi-final.

Littlehales made his Australian debut at 15 years of age at the 2015 International Canoe Federation (ICF) Canoe Sprint and Para-Canoe World Championships.

After Rio, Littlehales competed in the 2017, 2018 and 2019 ICF World Championships, placing fifth, third, then fourth.

As two of only 238 athletes on the 600 plus sized Australian team with previous Olympic or Para-Olympic experience, Dylan and Matt will surely bring a wealth of knowledge and leadership to the Green and Gold army.

Alongside them, McDermott, Rowles, Wales, Simon and Carpenter will take on the world’s bext competitors but will be buoyed by the support and adoration of all their fans here on the Central Coast.