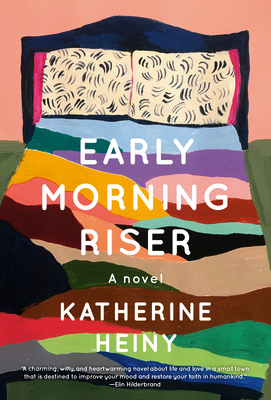 Sometimes you just want to read a book that will help you escape for a little while.

One that isn’t going to set the world on fire with conspiracy theories or depress the heck out of you with characters in hopeless situations or create much of an emotion at all.

I was in that frame of mind when I chose to read Early Morning Riser.

Jane is 26 when she moves to Boyne City, Michigan to take a job as a second-grade teacher.

Soon after moving to town she locks herself out of the house and ends up locking lips with Duncan, a woodworker that moonlights as a locksmith.

Duncan is in his forties, previously married to Aggie, whom he sees regularly as he mows her lawn (that’s not a euphemism by the way, he actually does her yard work).

Aggie is now married to Gary, but Gary doesn’t like lawns or leaf blowers or much of anything.

Duncan employs Jimmy Jellico to help around the workshop.

Jimmy has been described as “slow learning”, but Duncan has the patience for Jimmy.

Jane and Duncan are soon a couple, but it is difficult for Jane as it seems Duncan has been a “couple” with every girl in a 30-mile radius.

Everywhere they go they run into one of Duncan’s exes.

There are also a lot of calls from frustrated customers.

Duncan can’t seem to get anyone’s furniture out on time.

Jane’s life is good – she loves Duncan, loves being a teacher, develops a close friendship with Frieda, a music teacher who HAS to bring her mandolin everywhere.

Jane is feeling grown up and sophisticated – she shops enthusiastically for all her clothes at the thrift shop, hosts dinner parties, and so on – yes, life is absolutely good, except …

Duncan has no intentions of getting remarried.

That doesn’t fit with Jane’s life plan, so she says goodbye to Dunan, although they run into each other often – it is a small town after all.

Jane meets Luke Armstrong (people like to call him Lance, they are a clever lot) and the two plan to marry.

However, tragedy happens right before the wedding, which will derail several lives.

Early morning riser is a light, funny and well-written story essentially about love and building deep connections, told in episodes with a new chapter for each new year.

Its main strength is its wonderful portrayal of several adorable characters.

Aggie’s husband Gary is a hoot – he has more peccadillos than you can poke a stick at.

It would be fun to see him portrayed on screen.

But holes in the plot there be many.

Although I liked Gary there is no way Aggie would put up with a guy like that.

Jane seemed very patient to put up with Duncan’s inability to get projects out and get income in.

And why weren’t the townspeople keeping a better eye on Jimmy?

People are not this naïve, especially in a small town where everyone minds each other’s business.

Overall, I liked the book, maybe 3.5 stars out of 5, I tend to like stories about small towns with well-developed characters and touching stories.

This one just missed on some of my criteria, but still well worth the time.

Book Review – Then She Was Gone