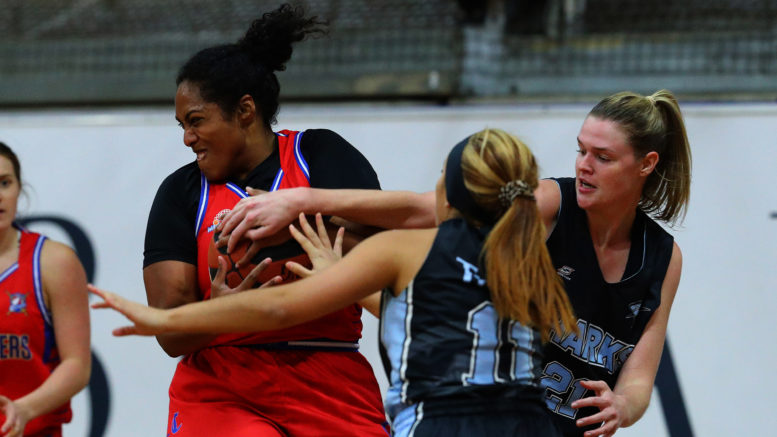 The Central Coast Crusaders play Sutherland Sharks in Round 8 of the Waratah League Womens Division 1 at Breakers Stadium on 29th of May, 2021 in Terrigal, NSW Australia. (Photo by Paul Barkley/LookPro)

For the Central Coast Crusaders, another challenge was presented by the Sutherland Sharks and Blacktown Storm, one that the Youth Men and Women teams were able to overcome but stopped the Opens in their tracks.

Played on Saturday, May 29, at Breakers Indoor Sports Stadium, the Youth Women were first up in a contest against the Sharks.

In a tennis-like match that went back and forth all game, the final score was 65 – 59 to the Crusaders, but it wasn’t until the closing minutes of the game that the girls pulled away.

Sara Matthews led the way with an outstanding 31 points, a team high for the season, with half of those coming off some very efficient three point shooting.

Abbey Cracknell once again put in the work that we’ve grown used to seeing this season, commanding the team at both ends of the floor.

Katie Bailey and Paris Forcadilla also did a stellar job playing their role and Paris went on to hit a late shot to seal this win for the girls.

The win takes the Youth Women to the top of the Pool B ladder with seven wins and only one loss.

The Youth Men played and won against the Storm in another hard fought 68 – 60 point win.

The boys got out to an early 20 – 2 lead, muscling the Storm out of contention, but the visitors came back in the third quarter to make things a little shaky for the local boys.

“The Storm play a loosey goosey streetball style of basketball which, when it works. is very difficult to play against,” said Head Coach Mikko von Lueders.

Nonetheless the boys got it done with many notable performances.

Alex Bailey and Nicholas Wooller also played their part with a disciplined display in the face of the Storm comeback.

Unfortunately for the Crusaders, both Opens teams were defeated.

The Women took a big hit against the Sharks, going down 85-67.

The Sharks are one of the best teams in the league in 2021 and the women will take some positives away from their strong showing in the third period where they narrowed the margin to 10 points.

“We played possibly our best game in a losing effort to a powerhouse undefeated Sutherland Sharks,” said Head Coach Lueders.

Sara Matthews continued her domination on the offensive end, scoring 28 points, grabbing 5 offensive boards and a total of 13 rebounds.

Abbey Cracknell found herself in early foul trouble, causing her to miss out on much of the first quarter.

It was the first game this year where no players in the team scored over 20 points, the highest score coming from James Trustum with 14.

“Another tough result for us against Sutherland, we just found it hard to score which hasn’t been a problem for us this season,” Coach Jared Scoines said.

Along with the Youth teams, the Open Men will next face the Hornsby Spiders on Saturday, June 5, at the Brick Pit in Thornleigh.