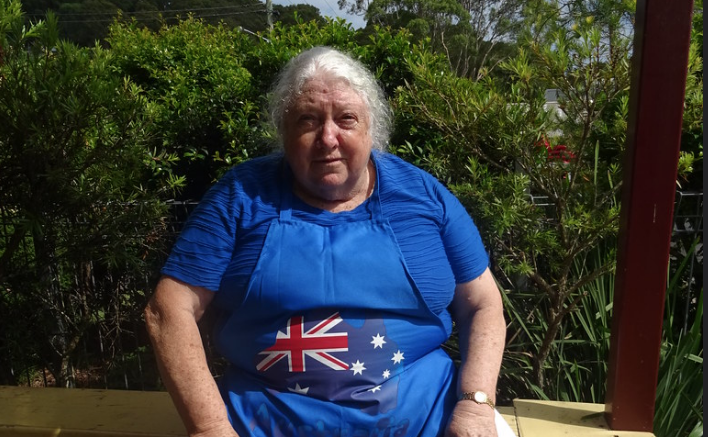 Fay Gunther at her beloved Wagstaffe Hall on Australia Day.

Residents of the Bouddi Peninsula are mourning the loss of community leader and passionate local activist, Fay Gunther, following her recent passing.

With over a 20-year history of community leadership, Fay was a past president of the Wagstaffe to Killcare Community Association (WTKCA) and, in the intervening years, filled many other roles within the group.

She died at Sydney’s Greenwich Hospital on Tuesday June 8, after a short illness, aged 79.

A spokesperson for the Association commemorated Fay’s involvement in the community.

“Fay, with an army of volunteers, worked tirelessly over 25 years for actions which would meet the needs of the community and achieve outcomes for the benefit of its members,” the spokesperson said.

“One of Fay’s most important concerns was the preservation of the special character of the area.
“For those of us who worked with her in WTKCA, we will sorely miss her presence.

“We will miss the coffees, the yarning, the plotting to maintain community facilities.

“We will miss Pippa with her bouncing tail, and we will miss the definite views expressed by Fay.

“She won us all over with her dedication and commitment to community … she was a great friend to many of us.

“And above all, this community is built on her efforts.”

Fay first arrived in Wagstaffe in 1996 with her purchase of a little cottage in Wagstaff Ave.

She was said to have described it as a ‘derelict wreck’ which needed to be rebuilt entirely, but wished, however, to keep its original character and ambience.

Fay then joined the Pretty Beach/Wagstaffe Progress Association (now WTKCA), putting her hand up for the position of Vice President that very same year.

Local historian, Robyn Warbuton, reflected on Fay’s arrival to Wagstaffe and the contributions she has made to the area.

“In 1997, the need for incorporation of the Association was instigated and achieved by Fay,” Warbuton said.

“The Progress Association became an incorporated body on March 10, 1998.

“It meant the Association had become ‘…a force to be reckoned with’ and that ‘the members had entered a new era of Progress’.

“From February 1998 until the AGM in May, Fay chaired the meetings in the absence of the elected president and so by default assumed the position which became official at the AGM.

“[And] hall restoration was on the agenda.”

Fay introduced the first ‘Trash and Treasure’ in 1998 to raise money for the refurbishment of Wagstaffe Hall.

It has now become a popular event held on Easter Saturday each year whereby residents are encouraged to ‘have a clean-up’ and donate their ‘junk’ to the sale.

Warbuton said it was Fay’s hard work, along with Gwen Perrie, that resulted in the total renovation of the Hall.

“An offer of huge importance turned up – the chance to apply for a grant of money to improve the premises,” Warbuton said.

“Fay and Gwen saw the opportunity and prepared submissions … two submissions for GCC Grants were lodged with Gosford City Council – both were successful.

“A rescue package was needed and an outstanding one was delivered.

“A recipe of imagination, innovation and hard work was called for and who better to produce it than the two forces that emerged on the Progress scene at that timely time – Fay and Gwen.

“[They] set to work to renovate and recreate a building that is not only a very practical and convenient meeting place but a beautiful venue, where people come together to enjoy very special events or celebrations.”

Warbuton said Fay was ‘quite militant’ when it came to objecting to unwanted developments in the area, highlighting Fay’s role in a number of community campaigns such as the proposed Supershuttle service from Gosford to Sydney, the demolition of the Ferrymaster’s Cottage in 2001, and the introduction of parking fees at Putty Beach.

After leaving her role as Club president, Fay was appointed the Public Offer in April 2000 where she remained until this year.

She also served on the Heritage Committee and on the Turo Tennis Court Committee for several years.

Another past president of the WTKCA, Peta Colebatch, said: “Fay is irreplaceable, she was a great friend to many of us and we will sorely miss her.”