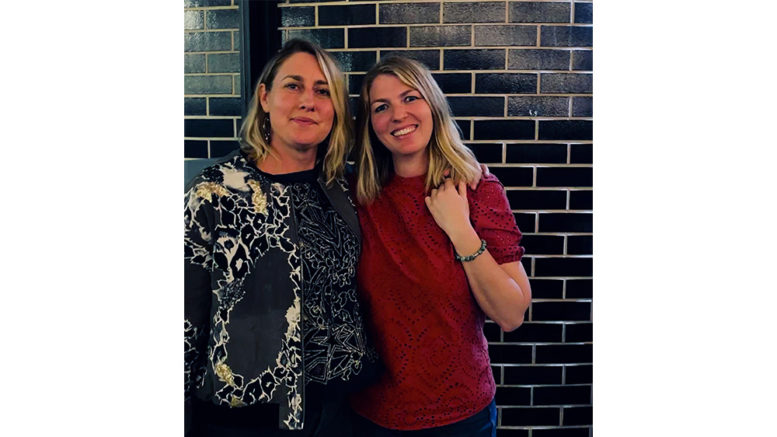 A daring rescue at Umina Beach last month has led to calls for increased signage at a popular tourist spot after a family was involved in an almost fatal accident.

Friends Zoe Hauptmann and Chrystal Lynch were out surfing near the NRMA Ocean Beach Holiday Resort on Monday, May 10, when they discovered several people struggling in a nearby rip.

The family was holidaying at the Resort and was set to return to Sydney later that afternoon.

But as the children played, running in and out of the waves, trouble struck, and they found themselves caught up in the strong rip.

The children’s father then entered the water to help, before succumbing to the rip himself.

Chrystal said her memory of the overall event was hazy, but she can firmly remember the panic she felt as she saw what was happening.

“I had gone out surfing with Zoe and had gone further down the beach to practice in the shories … and I remember a man coming out towards me in the water,” Chrystal said.

“He asked me to help as there were some people struggling.

“I heard there were a couple of kids and I just bolted up the beach and stopped when I heard them calling out for help.

“I could see they were all scared and exhausted – the man, Cheyne, looked absolutely panic-stricken.

“He knew it was bad.

“I remember running with my board to them and thinking ‘Is this real, is this really going to be up to me?’ because there were literally several other, far more capable board riders only 50 metres up the beach.

Chrystal said she found four people out there treading water, with another man Mick out trying to keep the older boy afloat.

She said her heart sank when she realised there was another man out there.

“I realised that I didn’t have a board anymore…I’m tired, I’m in a rip, I’m with a man who couldn’t talk.

“I called out for help and for Zoe but I couldn’t see her, I didn’t know she was on her way.

“I had this moment where he was grunting and one of the moments that haunts me is that ‘no ones coming’ and I immediately thought of my kids – I have 2 sons.

“So, when Zoe rocked up, I honestly felt like she had saved my life.”

She also said it was important to note there had been three other ‘incredibly brave’ people jump in at different times to help the family.

Zoe said she had been watching Chrystal surf before things took a drastic turn, spotting a man holding up his kids in the deep waters.

“I remember sprinting up the beach and by the time I had gotten there, Chrystal had already got the kids on the board,” Zoe said.

“I saw the dad floating, he was out past the breakers, and he was putting his hand up.

“We paddled out to him and found he was totally unresponsive, we somehow managed to get him on the board, and started paddling in straight against the rip.

“I felt strong, I felt in control …we both went into action Super Mum mode.

“This young lady ran over and helped pull him over on his side.

“The helicopter came and took him to Gosford Hospital; … his lungs were full of water.”

The man was later discharged that night and was given the ‘all clear’ from medical staff after regaining consciousness.

But the consequences of the rescue didn’t just stop there.

Chrystal said the after effects of the rescue have been surprisingly challenging, with her immediately seeking support from her regular counsellor and people from the surf club who have experienced these type of traumas.

“We’re both just waiting for this good feeling to kick in and it hasn’t.

“I’ve been experiencing sounds of the kids calling out in my head and that’s really rattled me.

“I have felt concerned that I was impulsive, and I didn’t think about my safety or my family – and I thought, ‘gosh is this okay that I responded in this way?’

Zoe said she has experienced similar effects, with the similarity in ages between her children, and of the Sydney family, hitting a little bit too close to home.

“I’ve just been really anxious, but apparently it’s a normal reaction to trauma like that,” Zoe said.

“It doesn’t seem logical to me to be so upset when everything seemed to turn out okay.

“One of the kids was the same age as my eldest.”

The duo have now returned to the water, with Chrystal saying it was ‘essential’ for both of their recoveries.

“Getting back into the water that first time took everything – it felt impossible,” Chrystal added.

“When I was getting ready to go in, I was shaking and I thought I was going to vomit.

“I wanted to show my boys though that I could, and I want them to have the same love of the ocean that I do … and not to be scared of it.

“My surf coach Ron, from Sal’s Surf School, has gifted me my first ever board to help me get back into the surf and I love it – it’s a beautiful bright yellow board [and] hopefully I’ll eventually teach my kids and my nieces on it too.

“When I went down for my first surf a few days after the event, I just heard this ‘Oh my god’, and I turned around and it was Zoe, and it was the most perfect coincidence.”

In the days after the rescue, both Zoe and Chrystal have kept in touch with the family.

“Being in touch with the family has been beautiful – for me it’s been a big part of getting through it,’ Chrystal said.

“The dad has been sending us messages every day … they’re just a beautiful family.”

Zoe called for more signage to be placed along the pathway, or at the caravan park to warn visitors of the danger.

“That rip is literally there outside of the path …when you don’t know the ocean and see it ‘calm’ – you just go out,” Zoe said.

Chrystal echoed Zoe’s calls for increased signage in the area.

“I spoke to a local in the carpark briefly [afterwards] and he said that six months ago he’d saved a nine-year-old girl in the same spot,” Chrystal added.

“And we’ve since found out that the day before there had been another close call with another family.

“I don’t want it to take an actual tragedy to get a sign up, we do it on the roads to stop wildlife from being hurt so what is the hesitation here?”

“Where these people were – the water looked calm, it’s understandable that people thought it was safe to swim in.”

Council, however, maintains there is sufficient signage at the caravan spot.

“There are no plans to extend this level of service,” a Council spokesperson said.

“Following a review, there is currently sufficient signage at this location, which is consistent with all other beach locations.”