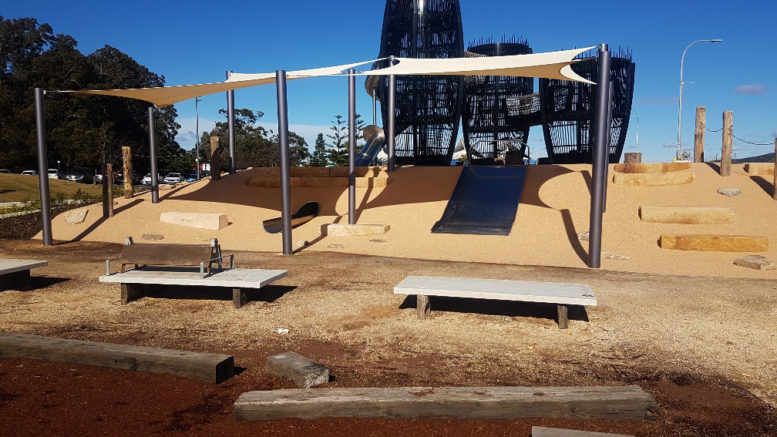 Leagues Club Park’s play area has been improved by adding rubber soft-fall around both slides.

The new regional park at Gosford opened on February 27 but by the end of day one the areas around the popular slides was already the worse for wear.

The slides were a great hit with the kids, but they found their own way back to the top – via the landscaped garden rather than the concrete walkway nearby that it was planned they would use.

The Hunter and Central Coast Development Corporation (HCCDC) closed the area on May 24 to remove the trampled garden and replaced it with the rubber soft-fall.

“This should make it quicker for little feet to get back to the top,” the HCCDC said on its Facebook page.

The slide area opened again to the public on June 9 and the rest of the play space remained open during the works.

The project was delivered by the Hunter and Central Coast Development Corporation which will maintain the area for the first 12 months before Central Coast Council takes over maintenance.

Parliamentary Secretary for the Central Coast, Adam Crouch, said the nature-inspired play zone was now “better than ever”.

“Leagues Club Park is proving popular with local families and these playground improvements will allow even more kids to safely run, climb and slide,” Crouch said.

“The soft-fall surfacing looks fantastic and fits in perfectly with the Park’s natural setting.”

“This award is a testament to the talent and dedication that we have in the region, including the Darkinjung Local Aboriginal Land Council.”