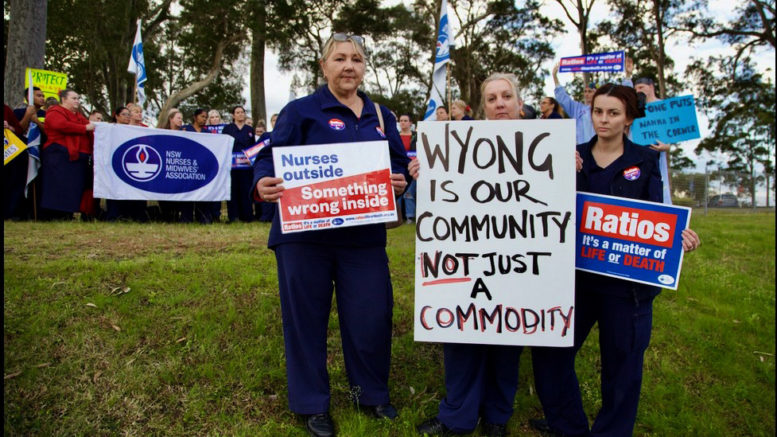 Nurses on strike at Wyong Hospital

Hundreds of nurses and midwives walked off the job at Wyong Hospital and Long Jetty Continuing Care centre in Toukley on Wednesday, June 16, over the need for safe staffing levels, and called on the NSW Government to introduce nurse to patient ratios.

Off duty nurses joined the rally in their own time outside Gosford Hospital.

They want staffing overhauled across multiple wards and units, including ratios of one nurse to three patients in emergency, paediatrics and post-natal maternity wards, and a ratio of one to four on other wards.

Both Wyong Hospital and Long Jetty Continuing Care remained open to the public and life preserving staff were available for the duration of the strike action.

Central Coast Mental Health branch members, who work in the community and at Wyong Hospital, also voted unanimously to strike for two hours.

Meanwhile, nurses and midwives gathered outside Gosford Hospital at lunchtime to highlight their staffing concerns.

Claims of widespread understaffing, regular overtime and less time available to properly care for patients were among the issues that prompted the snap strike actions.

All sites called for nurse-to-patient ratios.

“It didn’t have to come to this, but it has, because the government is refusing to listen to us or negotiate with us about bringing in nurse to patient ratios,” she said.

“The Government’s preferred staffing model is outdated and often fails to ensure that we’ve got the number of nurses we need on each shift.”

NSWNMA Wyong Hospital branch President, Kelly Falconer, said staff at Wyong had to work beyond what should be expected of any professional nurse or midwife.

“Too many nurses and midwives are now at breaking point because of the state that our health system is now in,” she said.

“We need mandated nurse to patient ratios in our hospitals, just like they have in Queensland and Victoria.

“They cannot keep working us into the ground like this, it’s not fair to our patients or our communities,” Falconer said.

“We haven’t got the ratios we need and it’s not good enough.

“We need shift by shift ratios to deliver safe care and the best possible outcomes for our patients and clients,” Miller said.

The NSWNMA says that to date, the NSW government has refused to negotiate with them on introducing nurse to patient ratios.

Both The Entrance MP, David Mehan, and Shadow Minister for Central Coast and Wyong MP, David Harris, were at the rally to show their support.

“This campaign has been going since before the last State election,” Harris said.

“Ratios are so important, it’s about patient health.

“When our nurses get tired and overworked it impacts on patients.

“Here on the Central Coast, our hospitals have never been busier.

“The Government can’t just be about shiny new buildings, it’s about the people inside those buildings,” he said.