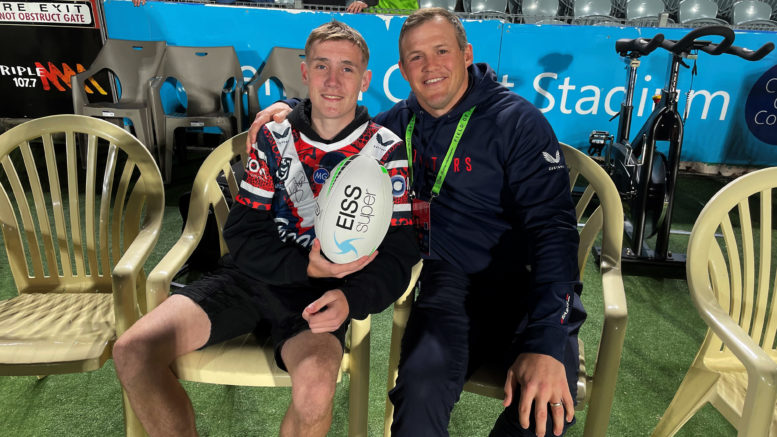 May 29 was a night to remember for a 15-year-old Springfield lad who lives with Cystic Fibrosis.

Rhyan (surname withheld for privacy reasons) and his family were thrilled to be invited to the Roosters v Raiders game at Central Coast Stadium, where Rhyan took the match ball out onto the field.

Rhyan has been in and out of hospital since he was just six weeks old and he and his family are regular users of both Ronald McDonald House and the Ronald McDonald Family Room at Gosford Hospital.

On the night, Rhyan was also presented an Indigenous players jersey signed on the night by Roosters players.

Being from the Dharawal and Awabakal mob, it was particularly fitting for him to attend the game, which is part of the NRL’s Indigenous Round.

“I had a great time and really enjoyed meeting the players,” Rhyan, who sadly lost his grandfather last year, said.

Due to COVID-19, Rhyan and his family were unable to visit his grandfather, who was a mad Roosters supporter and lived in Queensland, but Rhyan’s sister said “Pop would be so proud” of Rhyan’s involvement in the game.

“We are very appreciative of the ongoing support of both the Sydney Roosters and our national partner Steggles Charity Nest and know that Rhyan and his family will remember this once in a lifetime experience,” she said.

The Ronald McDonald Family Room at Gosford Hospital opened its doors in 2013 and has welcomed over 53 000 people, including families just like Rhyan’s, in need of a break from the hospital ward.

School keen to connect with community

Ride For Sick Kids has a Central Coast leg