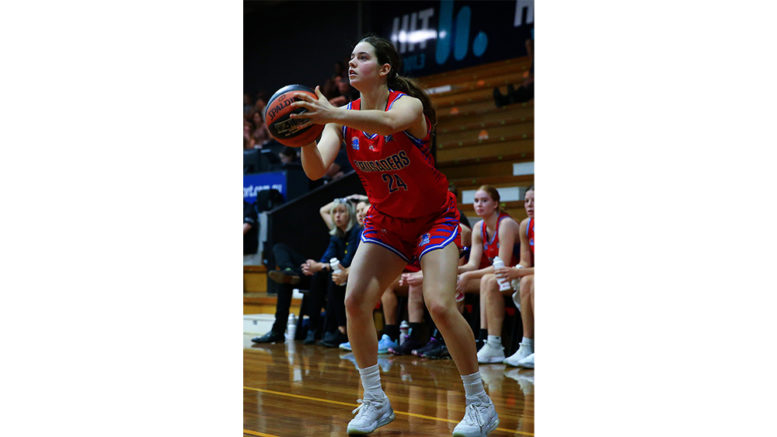 The Central Coast Crusaders play Manly Sea Eagles in Round 1 of the Youth Women 1 Waratah League at Breakers Stadium on 10th of April, 2021 in Terrigal, NSW Australia. (Photo by Paul Barkley/LookPro)

The travelling Central Coast Crusaders had a difficult Saturday, May 8, in Sydney when they faced up against the Hills Hornets, coming away with only one out of four wins.

The success on the day came for the Youth Men’s team who caused pandemonium in the Hills Basketball Stadium by scoring the game winner on the final bell to finish 72 – 71, the final credit going to Jamal Shoaib.

“The youth league men was a rollercoaster of a win, you won’t see too many of those,” reported Head Coach, Mikko von Lueders.

“The boys wouldn’t have gotten to that position without some strong contributions all round.

The team’s fourth win of the season puts them in second spot on the ladder.

The Youth Women were close to a similar result, in the end suffering their first loss of the season in a close match that finished 62 – 67.

The game provided a chance for some of the substitute players to step up and do their best, with Sara Matthews and Abbey Cracknell coming off a week away at the under 20 Australian championships.

For Head Coach, Will Granger, the team lived up to the challenge and were unfortunate not to come away with the result.

“Bronte Moore continues to live up to her reputation as a hustle player, coming away with some 50-50 plays and causing more than her fair share of turnovers.

“Paris Forcadilla also didn’t miss a beat shooting wise, continuing her efforts with stellar percentages across the board.

Coach Lueders drew attention to a stand out performance by Jonalyn Wittwer who played the full 40 minutes and contributed a solid 12-4-3 statline.

“Abbey Cracknell came through for her team once again, this time leading the charge in points with 17 – she dropped 7 dimes and grabbed up 8 boards, making this yet another stand out performance for her.

“It was back and forth game from start to finish and tight throughout, unfortunately they just ran out of legs.”

The final match of the day was the Opens Men, who fell to their opposition by 72 – 91, their biggest loss of the season so far.

“After a two week hiatus, the guys had a great four sessions in preparation for the Hills and unfortunately that just didn’t transfer onto the court,” reported Head Coach Jarred Scoines.

“It wasn’t all bad news with James Trustum coming away with a season high 25 points and 13 rebounds, making it his first double-double for the season also.

“Unfortunately it was the free throws that hurt in the end, with 27 attempts for the hornets and only 11 for the Cru.”

The Opens Men team have struggled so far for wins this season although the other Crusader teams are finding their form.

With the season still very much alive and everything there to play for, all four teams will have to face the upcoming weeks with focus and grit.