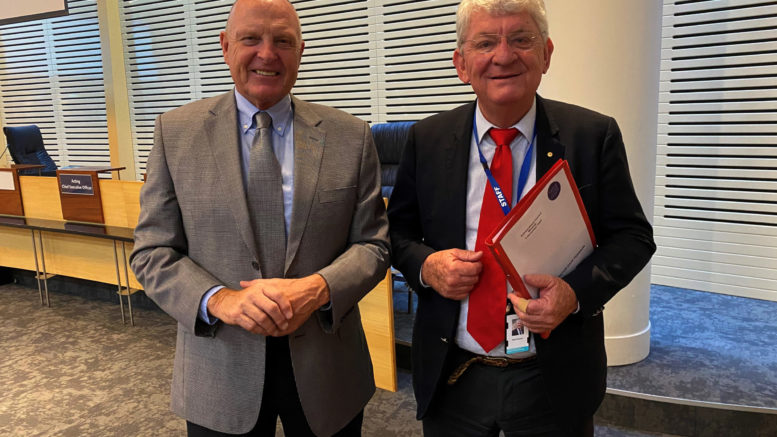 Dick Persson officially retired from his position as Central Coast Administrator on Wednesday, May 12, but not before he took one last parting shot at the suspended councillors.

He has taken steps to prevent the councillors from standing in the next local government elections, expected to be in September 2022.

Persson has written to Local Government Minister, Shelley Hancock, asking the Government to consider measures that would prevent the councillors from standing for re-election, including changes to the Local Government Act if necessary.

“I believe such a move would have strong support, particularly where communities have been negatively impacted due to the behaviour of their councillors, who ended up dismissed only to return in the next election,” he said.

“This was a strong and consistent theme made clear by the community during the consultation over the proposed Special Variation rate rise.

“I suspect that in communities where this has occurred, they would prefer that dismissed councillors did not ever return.

“I believe such a move would have strong consumer support and such a policy would put greater pressure on all future councillors to improve their performance and behaviour,” Persson said.

Persson served six months at the helm, as Council set about clawing its way back from financial disaster.

First appointed by Local Government Minister, Shelley Hancock, for three months on October 20, 2020, Persson’s tenure was extended by three months as the depth of the measures needed to get Council back on an even keel was revealed.

“At first I said no to the appointment, but I was convinced that my services were needed and this has been the hardest Council of the four where I have served as Administrator,” he said.

“The extent of the financial disaster was greater than I had imagined.

“There has never been a greater case of financial mismanagement in Australia’s local government history.

“People in local government tend to expect that there are enough checks and balances in place and it was mind boggling that this Council had to go to the State Government and say it couldn’t afford to pay staff wages.

“There was an element of crisis that I hadn’t fully anticipated.”

Persson said one of the most stressful times during his tenure was in the days leading up to Christmas as Council awaited a decision on whether or not it had been successful in obtaining a $100M loan from the “last lender still prepared to deal with us”.

“It was a tense period of waiting but we got that loan and that meant we could continue to trade successfully,” he said.

“One of the hardest things I had to deal with was laying off staff.

“Some people were happy to take voluntary redundancy but there were some staff who didn’t volunteer and that was difficult.”

Persson said probably the most important decision he had made was to employ David Farmer as Council’s new Chief Executive Officer.

“I feel now that there is no danger of things going backwards, even if some of the suspended councillors are returned at the next election,” he said.

The next election is expected in September 2022, following the conclusion of the Public Inquiry called by the Local Government Minister.

Persson said one of the most enjoyable things about his time on the Coast was that he met some “fantastic” people.

“I visited places such as The Glen, Coast Shelter and Pacific Link Housing, all of which are doing wonderful work,” he said.

“That’s what gives you the energy and enthusiasm you need.

“There was not a lot of room for positive initiatives but I was pleased to do some work around disability playgrounds with (community advocate) Gary Blaschke (of Lake Munmorah).”

Persson acknowledged that he had made some unpopular decisions.

“I know there are some concerns around asset sales and the proposed rate rise, but our lender wanted to be satisfied that we had a plan whereby we would increase revenue (rates), pay down debt (asset sales) and cover operating costs (staff cuts),” he said.

Persson said he had no doubt that the Public Inquiry into Council would come up with the same conclusions that he had reached, that the root cause of the crisis was that the former Council CEO and CFO and councillors did not do their jobs properly.

“I have also been disappointed in the lack of leadership of local state and federal MPs,” he said.

“Not one of them has supported the hard decisions.

Persson said he had achieved most of what he had set out to do, although he would have liked to see a decision before he left from the Independent Pricing and Regulatory Tribunal (IPART) on a proposed 13 percent rate rise above the two percent cap.

“If that rate rise is not approved, the consequences of finding another $27M in savings would be devasting,” he said.

IPART made its decision on May 17. See separate article.

Persson said that the role of Central Coast Council Administrator was his last in local government.

“I’m looking forward to getting back home to Bronte and spending more time with my family,” he said.

He has now officially handed over the reins to the new Administrator, Rik Hart, who previously was Acting CEO before the appointment of David Farmer.

“He is a very experienced local government CEO and someone who will provide continuity with the repair work we have undertaken jointly over the past six months when he served as Acting CEO,” Persson said.