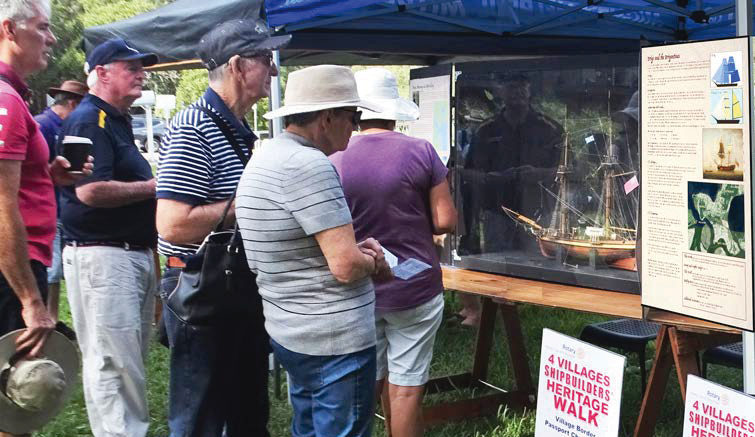 Around 2,000 people turned out for the Rotary Club of Kincumber’s annual 4 Villages Shipbuilders Heritage Walk on Sunday, May 2.

The Walk has been developing over the past eight years; a leisurely walk along the waterfronts of the villages of Kincumber, Yattalunga, Saratoga and Davistown where for well over 100 years wooden ships were constructed.

Participants purchased a Passport and Q & A Card, collecting answers from the four villages’ historical ship displays and going into a prize draw.

The displays featured various models including sloops, cutters, ketches, schooners, brigs and brigantines built in the district, which were specially constructed for the event.

Rotary Club President, Brice Dent, said support to Rotarians at each checkpoint was provided by the Central Model Makers, the Men’s Shed, the 3 Villages Community Group and the Sydney Models Shipbuilders Club.

“The day commenced at Kincumber waterfront, near the ship’s bow sculpture (and) finished at Davistown, where exhibits featured in the Progress Hall included children’s artworks from Holy Cross School, Kincumber, and art and ship models from Brisbania Public School, Saratoga.

“There were also displays from Brisbane Water and Wyong District Historical Societies.

“The Davistown waterfront was a hive of activity with a host of stalls including food, selected retail, arts and crafts, vintage machinery, rowers with an historic rowing skull, Radio-93.3 FM mobile studio and a brilliant display of some 80 American, British and Australian classic cars.

The official opening featured an address by Member for Terrigal Adam Crouch, a Welcome To Country by Tracey Howie and a Smoking Ceremony by Tim Selwyn, which also featured talented didgeridoo player Kyle Howie.