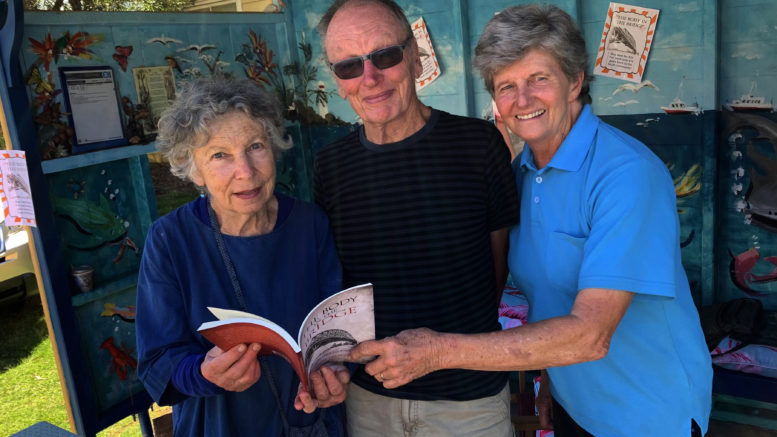 The shelter, which was given a colourful facelift by community members during COVID-19 social restrictions, saw dozens of residents turn up to check out Menzies’ latest mystery novel, The Body in the Bridge, with the author contributing half of the profits from the day’s book sales to the Wagstaffe to Killcare Community Association.

“I was able to contribute $210 to the Association; a small gesture of appreciation from me for all the work the Association does for the community,” she said.

“I’ve run Life Writing courses on the Central Coast since 2009.

“I tell people to put their books on their bookshelves between Shakespeare and Jane Austen and enjoy the shared fame!”

It tells the story of retired teacher Bax, her former student Lauren (now a policewoman), and real-life Sydney Morning Herald investigative journalist Kate McClymont as they turn detective to try to reveal the identity of bones found inside the girders of the famous Sydney Harbour Bridge.

Sydney’s colourful past of razor gangs, brothels, street battles, and secret armies all came to a head on the day of the official opening of the Bridge, and that’s where the characters begin their search.

Their investigation takes them back and forth between the chaos of the 1930s and the high-tech forensic analysis methods of the 21st century.

Menzies said the idea for the novel came about after she read about a robot which goes inside the hollow girders of the Bridge.

“I thought it’d be interesting if it ever found bones down there where somebody had fallen,” she said.

The Body in the Bridge is available as an e-book through Kindle and Booktopia, and as a hard copy at Book Bazaar in Umina, Wagstaffe Store and through the author at helenmenzies@bigpond.com.