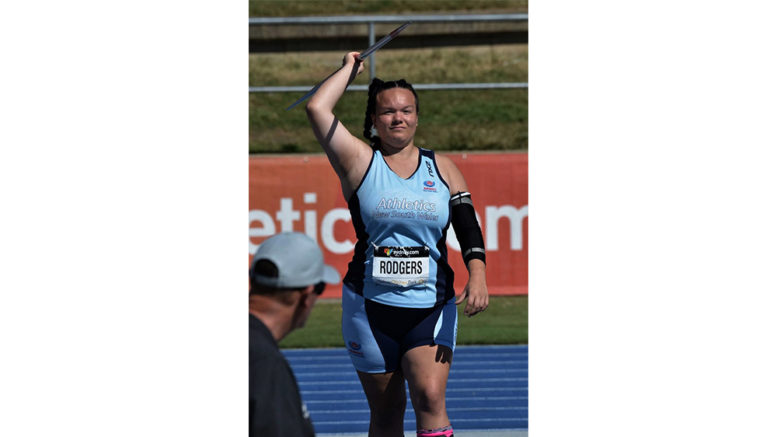 A number of athletes from Gosford Senior Athletics Club have come away with exceptional results for the NSW state team at the 2021 Australian Track and Field Championships at Sydney Olympic Park Athletics Centre.

Rodgers’ coach and President of Gosford Little Athletics, Stuart Farrant, shared comments on his students’ progress and achievements over the National Champs.

“Annabelle has worked very hard over the last 12 months and the last six weeks especially, focusing on improving her technique,” Farrant said.

“She achieved two personal best throws in the javelin, first for the Opens then again for the U20’s, as well as in the Shot Put and she wasn’t far off for Discus.

“Overall, it was a very successful weekend for her with a lot of hard work that ended in her seeing the fruition of all her training with some good results.”

Rodgers has been nominated for the Coles Athletics Community Hero Awards 2021 for her records as a para athlete and her engagement with younger kids.

With voting for this award now underway online, Farrant shared some further comments on why she has been nominated for this award.

“We don‘t have a great field of Para athletes at the moment, so often our U15, 17 and 20’s all compete together and the U15’s in particular always look up to her.

“Annabelle is warm in nature, someone who always chats with the kids and tries to help them out, and has started something of a trade mark in her wearing of multicoloured socks!

“In fact, one of the little girls in our club turned up on the final day of the Nationals wearing a similar pair of those loud multi-coloured socks, just like Annabelle.

For Shannon, the purpose-built discus and hammer cage installed at Adcock park in recent years has been crucial in helping him train in his throwing events.

“Tom has done a lot of work at Adcock,” continued Farrant.

“Another one of those really hard working young kids who has put aside the time to do what he needs to do to achieve the result he has now reached.

“He’s got a very good coach, Peter Taylor, who has been with him for around 10 years now.”

For the Gunn sibling as well, their results reflected the hard work done in training.

Although Katie was just off reaching her personal best jump, all three of her jumps marked over 6m.

“This carnival was about consistency for her after putting in a lot of effort to make sure her body is in optimum health to allow her to perform at her best.”

Regarding Tyler, Farrant noted that the Opens competitor was both relieved and excited to come away with his medals after only recently returning from injury.

“He’s only four to five months back from a hamstring incident so he’s probably still a couple of runs short of his best.

“A lot of the guys he raced against had a full pre-season and maybe three or four more match races, so for him to be as competitive as he was is a really strong result.

“He’s worked very hard with his coaches and rehab as well so overall it was a brilliant result for him.”

As well as these athletes, ex-Gosford member Hannah Jones came second in the Opens 100m Hurdles, representing her new home state of Queensland.

With the season of athletics reaching an end, Gosford Athletics will now turn its focus to cross-country events which begin at the end of May.

Be the first to comment on "Rodgers shines at Nationals"