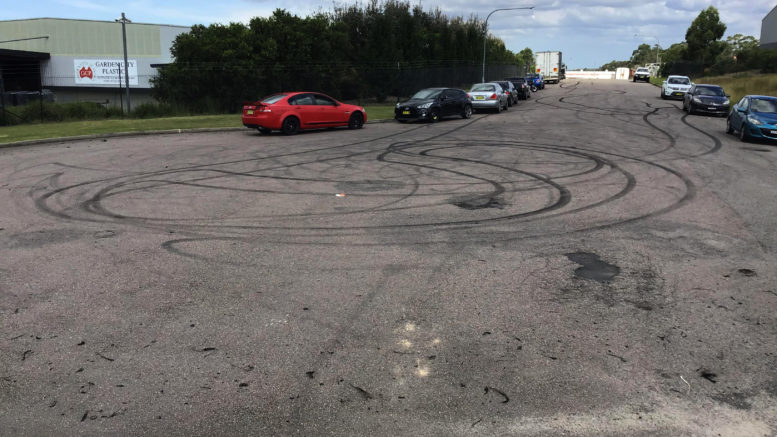 Pinnacle Place, Somersby, following one of the incidents

Business owners in the Somersby Industrial Estate are fed up with hoons using the area as a racetrack after hours and on weekends and will look into installing an LPR (License Plate Recognition) camera system in an effort to catch the offenders in the act.

“We are fed up with these hoons doing burnouts, drifting and other dangerous driving manoeuvres on the weekends especially when it rains.”

The spokesperson said on March 19 a group of around 20 cars tore up the area for two and a half hours from 9.30pm until midnight and although business owners were able to catch some of the activity on video, capturing licence plate numbers was difficult.

“The hoons conduct burnouts, drift in circles, leaving rubber burns on the roadways, and have look-out cars on site,” the spokesperson said.

“We are calling on the police to crack down on this illegal activity in Somersby.

“This has been going on for a couple of years.

“I had to attend my property one evening because the automatic gates were not working but there was no way I was going to go in there at midnight.

“One of the cars ended up in the driveway of one property.

“People are in fear for their properties and they’re afraid to attend their own premises after hours.

“Up to 20 groups can be there, blocking parts of the road and rubber from the tyres is left strewn across the streets.”

Inspector Dave Prevett from Central Coast Highway Patrol said both Brisbane Water Police and the highway patrol were aware of incidents of burnouts and hoon activity in the industrial estate.

“We have increased patrols in the area and will continue to continue to monitor CCTV footage,” he said.

“We ask any drivers who may have dash cam footage of offences committed to come forward; this may assist in identifying individual vehicles.

“There are also other options available to us in relation to covert surveillance.

“We have had some success at other locations through (the use of) video footage through CCTV at premises and from members of the public; we have had some convictions in those spaces.”

Insp Prevett said that as patrols step up in the area, police were asking people to continue to report illegal activity as it occurs.