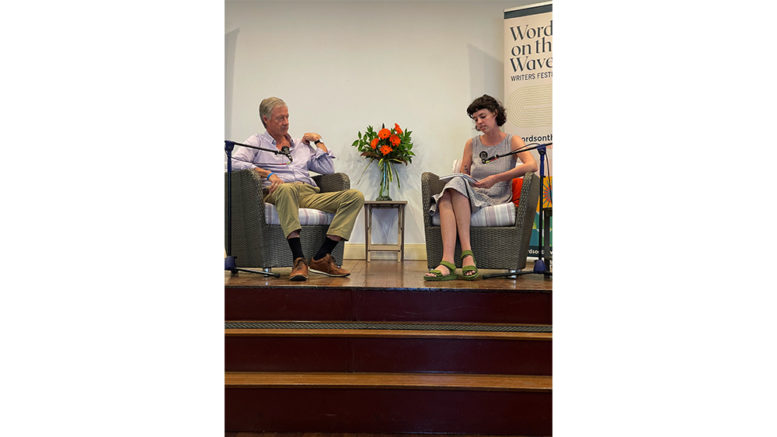 A one-day writers festival to support local authors was held at Wagstaffe Hall on Saturday, March 27.

The Bouddi Society’s inaugural event was held in support of the upcoming Words on the Waves Writers Festival in June.

Over 60 booklovers and volunteers attended the sold-out Words at Wagstaffe festival which hosted a range of talks on the sunny banks of the Brisbane Water.

After the attendees broke for lunch, the afternoon sessions became centred around historical fiction and family as Killcare’s Lily Cameron took to the stage.

Cameron was joined on stage by the Chairman of Allen & Unwin Publishing, Patrick Gallagher, to discuss her experiences as an up-and-coming author.

Cameron said she will continue to write through her Masters’ in Creative Writing program, before sharing a sample with the audience.

“I’ve always been a big reader since I was very little – I always wrote stories and poems, before I became more serious in my later years of high school,” Cameron said.

“There are so many books that have had a huge impact on me, including ‘Saving Francesca’ by Melina Marchetta as Francesca travels to Woy Woy in the story.

“I continue to learn the more that I read.”

As the recipient of the inaugural Allen & Unwin Creative Writing grant from the Bouddi Foundation for the Arts, Cameron said she was very grateful to receive the grant.

“It’s an extraordinary opportunity to be here to showcase arts and culture and stories.”

Author Meg Keneally was then welcomed on stage to discuss her writing process, along with family and her obsession with Australian history.

Keneally was originally scheduled to be joined by her father and famed author, Tom Keneally, however he was unable to attend due to medical reasons.

She was instead joined by MC Graeme Blundell for the talk.

Keneally discussed the process of working with her father on their collection of novels, The Monsarrat Series.

“It is an extraordinary honour to be writing with him, it’s exciting … I thought, ‘why wouldn’t I jump at this and see where it goes’,” Keneally said.

“I was really keen to join this hair brain scheme of his and get an insight into how he is as an artist, an author, as well as a dad.

“He’s given me lots of constructive criticism over the years and is massively encouraging.

“I used to stand back in awe – it was an amazing apprenticeship for me.”

An interview between actress and author Judy Nunn, and publisher Jane Palfreyman concluded the festival, as they discussed a wide range of other historical fiction novels.

Umina’s Book Bazaar was also at the festival, showcasing a range of books from the attending authors which were available for purchase.

Allen & Unwin’s Patrick Gallagher credited the pandemic for a resurgence in interest of books.

“Surprisingly, COVID-19 has been wonderful for books as a lot of people have returned to books,” Gallagher said.

Organisers will now look to plan the Words on the Waves Writers Festival which will be held across the June Long Weekend at Umina Beach.

More information about the upcoming festival can be found at wordsonthewaves.com.au

Wagstaffe books – only bazaar a success