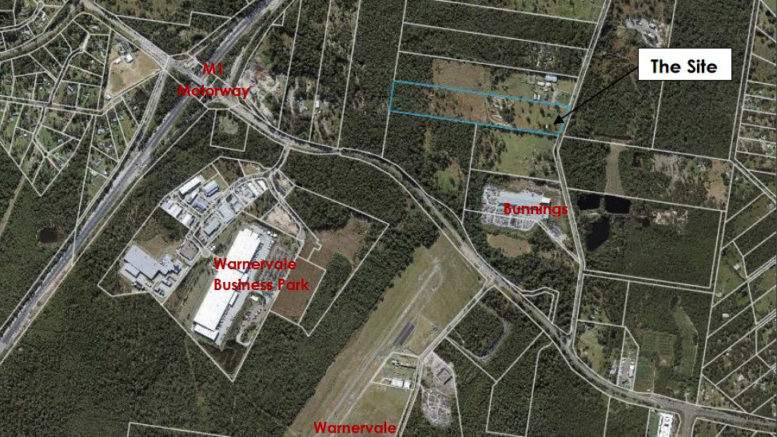 The brewery and restaurant site outlined in blue

Beerfarm, a company which already has a successful and environmentally sustainable brewery and paddock to plate style restaurant in Western Australia’s Margaret River region, is looking to set up a similar business on the Central Coast at Halloran.

Development application 315/2021 is being considered by Central Coast Council for a 10ha site at 92 Mountain Rd.

It is in an urban release area within the Warnervale Employment Zone, partly zoned for general industrial, partly E2 environmental conservation, and surrounded by large rural residential properties.

The development will be wholly within the industrial zone to not affect the E2 land, which is earmarked by Council for future acquisition for environment conservation.

There is an Endangered Ecological Community towards the rear of the site.

Plans are to develop the eastern part of the site as a boutique brewery and restaurant including car parking and market gardens to grow produce for use in the restaurant.

The brewery will be in one building with a laboratory, mill, brewing room, packaging, cool room storage for goods and raw materials.

The brewing area is where the milling, mashing, lautering, boiling, fermentation and other processes to produce beer will be undertaken.

A packaging area is where the finished product will be prepared for distribution and storage in the cool room.

Another building will comprise the 450-seat restaurant at ground level, with mezzanine floor, kitchen and bar.

It is envisaged the Beerfarm, when complete, will employ 42 full-time employees and 27 casuals.

Proposed trading hours for the restaurant are 10am to 9pm seven days a week, and for the brewery only on weekdays between 6am and 7pm.

Vehicle access will be via two driveways; one for staff, delivery trucks and service vehicles and the other for visitors to the brewery and restaurant.

The visitor and staff carparks are separate and there is a bus set-down lane.

Once operational, the brewery and restaurant will function under the appropriate licences issued by Licensing and Gaming NSW.

The first is a producer/wholesaler liquor licence including drink on site and a walk-up provision to cover the manufacturing and distribution of products.

A Statement of Environmental Effects (SEE) supporting the DA says there is a growing trend towards environmentally friendly craft beer breweries and sustainable practices.

Brewers realise that brewing is a resource heavy process with large amounts of water and energy needed, and they create a lot of waste from spent grains, the SEE said.

It said Beerfarm would employ sustainability practices at Halloran that it already used at its Western Australian business, such as recycling, upcycling, composting and would make efforts to continually improve their sustainability.

The aim for this paddock to plate style restaurant is to use sustainable practices to ensure the food is as fresh and as unprocessed as possible.

The Beerfarm in Margaret River is on 32ha where grazing cattle are fed spent grain from the brewing process and the market gardens are pesticide free.

To develop the Halloran brewery and restaurant, Beerfarm will use GEOHEX for carparks and driveways, which is an Australian made substitute to concrete and bitumen, made from 100 percent recycled plastics.

BioGill technology will be used to treat waste water on site; solar energy will be used extensively throughout the development and a gas fired boiler is proposed for the brewing process.

The large amount of spent grain from the brewing process will be used to feed cattle at Macka’s Australian Angus Beef, a fifth generation producer of angus cattle dating back to 1884 in Port Stephens.

Second survey has a no rate rise option