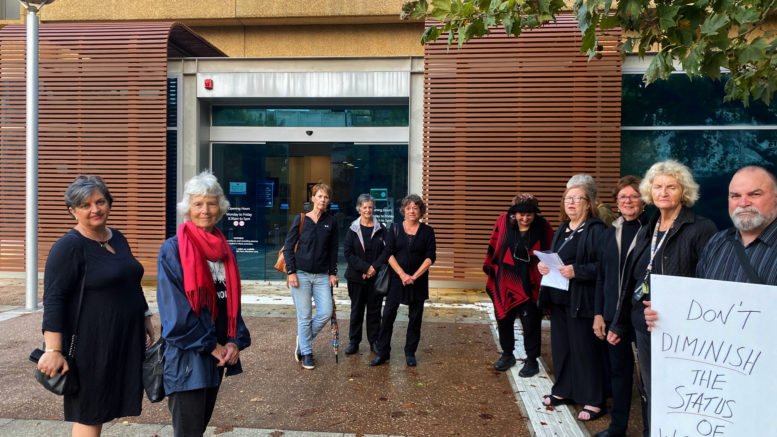 Central Coast Council’s Status of Women Advisory Committee has had a reprieve.

Former Gosford Councillor Vicki Scott, who was instrumental in setting up the committee in 2005, has applauded Council’s decision to retain the group, which had been at risk of disappearing.

A motion put to Council’s March 23 meeting would have seen the committee swallowed by a Social Inclusion and Advocation Advisory Committee, one of several moves suggested to consolidate various advisory groups into seven new, larger ones.

But following a small protest outside Council’s Gosford chambers ahead of the meeting spearheaded by Scott and impassioned pleas from Scott and suspended Councillor Jillian Hogan, Administrator Dick Persson was swayed and decided to keep the committee in place by amending the motion.

“I was very pleased that (Mr) Persson agreed with me and others who have been supporting the committee in (maintaining its) status quo,” Scott said after the decision had been made.

“I look forward to the day when we don’t need a women’s committee, but we are far from ready for that.

“At a time when this country is so dismayed at the treatment of women, and each day seems to bring a new and nastier story, it was disappointing that Council had chosen to put up a

motion which would effectively bury the committee under the umbrella of the Social Inclusion Committee.

Scott said that on 8 March 2005, (then) Councillor Terri Latella moved that Council set up an advisory committee for women.

“I seconded it,” Scott said.

“It was initially done because we felt that Council should play a role in enabling (International Women’s Day) IWD events.

“The committee became the Status of Women Committee and operated until Gosford Council was sacked prior to amalgamation.

Post amalgamation the committee was reinstated and went on to address various matters relating to gender equity and women’s rights.

“We ran forums covering homelessness among women and families, domestic violence, the need for more women to be elected on to Council, the need for women among staff to aim towards the pointy end of management etc.

“We discussed, and made changes relating to, parenting leave for staff members and family friendly things like making available a breastfeeding room in the workplace.

“We held a march through Gosford CBD every year to acknowledge IWD, and it became a fixture, until Gosford Council was declared defunct in 2015.

“We maintained relationships with women from a number of women’s organisations, and held meetings with representatives of those organisations to discuss the work each organisation was involved in.

“What an eye opener that was.

“We met women from all over – homeless women, politicians, authors, United Nations’ representatives.

“A former general manager told us that wherever he went in the state other general managers wanted to talk to him about ‘this women’s committee’ that they kept hearing about from their staff and councillors.”