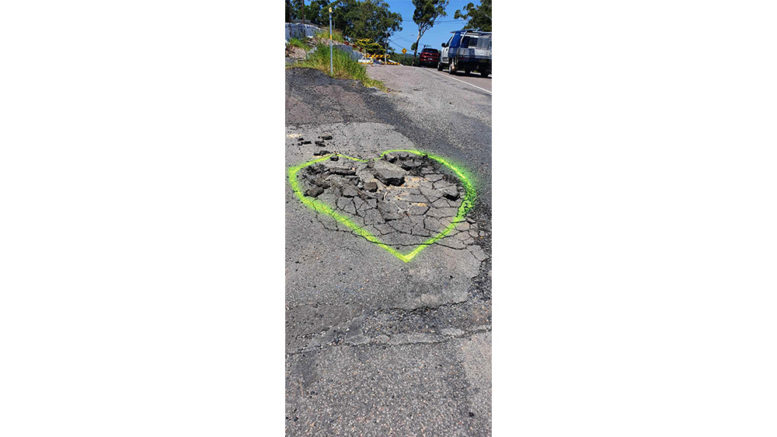 One Saratoga women is doing her bit to keep the community safe, spray painting circles and love hearts around potholes in her neighbourhood.

“The Council said they would clean it up so it would be safe; it is not safe,” Hartich said.

“I call them little volcanos erupting everywhere on the road between Moonah Ave and Warilda St.

“We have a seam opening right up at Malumba Ave, which I have watched cars go over, and it was spongy, and you could see the road moving.

“There are potholes everywhere, it is so uneven and such a mess that we have to drive slow.

“This is why I have sprayed all of these potholes.”

Hartich said her biggest concern is the unsafe environment the uneven road causes for children and the elderly getting off the bus.

“One gentleman was telling me that he is afraid when he has to get on and off the bus, as he is walking with a walking frame and thinks he might have an accident and might fall over.”

To assist her, members of the community have started donating more paint cans so she can continue highlighting the holes.

A Central Coast Council spokesperson said the recent stage of works undertaken in 2020 at the intersections of Moonah Ave and Warilda St had been concluded in December last year to reduce capital works expenditure due to Council’s financial situation.

“There are currently no further upgrade works for Davistown Road planned for the 2020/21 financial year” the spokesperson said.

The end of an era for youth services hub