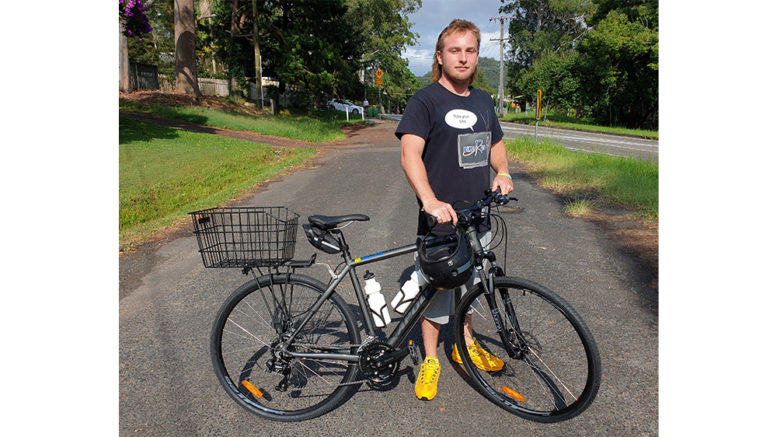 On the day marking two years after an accident that left Jack McBride with a brain injury, the 23-year-old will leave on an 800km journey, cycling from the Central Coast to Gallipoli Barracks in Brisbane.

Leaving on March 28, McBride will be doing the ride to raise awareness and funds for brain injury rehabilitation and mental health issues.

McBride named his trip Ride for Kyle in memory of his best mate, whom he sadly lost to suicide in 2020.

He will also be challenging his own mental health and brain injury recovery as he reaches the two-year point in his rehabilitation from a serious road cycle accident in 2019.

At the age of 21, McBride was injured in a critical accident, leading to six months of rehabilitation at Hunter Brain Injury Service at Bar Beach.

Inspired by the quality of care he received by carers on leaving the Brain Injury Service Unit, McBride said he has pivoted his career aspirations from construction into mental health caring and is now completing a Cert III in Disability Support.

“In my first year of rehab, I wasn’t able to go into the water on my own because I was a seizure risk,” he said.

“However, (my carer) Paul said because he was also looking after a person with quadriplegia and felt comfortable saving him, he would definitely be able to save me, meaning I was able to do more things with his support.

“If it weren’t for him having a positive impact on me, I would probably still be pretty negative and thinking about all the things I can’t do.

“He gave me the confidence to believe in my abilities to do things.

“Because I had some really good carers and some not so good carers, it made me see the difference a good carer can actually make in someone’s life.”

“It has been an outlet for me to see how I’m feeling, to get advice and point me in the direction of where I want to be,” he said.

“I now feel like I have a purpose, and I am making the most of what I’ve got.

“My mate Kyle, who I am doing the ride for, always lived life to the fullest, so I wanted to give back to him.

“If there were more places like ARAFMI for people to go to for mental health, it would not be looked down on as much.”

McBride believes the trip will take him under two weeks, travelling approximately 59km a day.

“I thought I might as well make the most of recovering from a brain injury; as I can’t drink alcohol or anything, I will do this for my recovery time.

McBride says his Ride for Kyle will also follow a cycling trip his great uncle made at the age of 70.

“And I want to show that younger generations are also giving back.”

“It is commendable that Jack has decided to join those who dedicate their lives to supporting people living with disabilities,” Wilson said.

“We encourage carers in the community, those both in the home and in the workforce, to reach out and get support – but it isn’t always easy.

“Sometimes it can be just through connecting with people with similar experiences, that can make a huge difference to the carer and those they care for”.

Buses decorated for a good cause

Hannah makes it her business to fight dementia