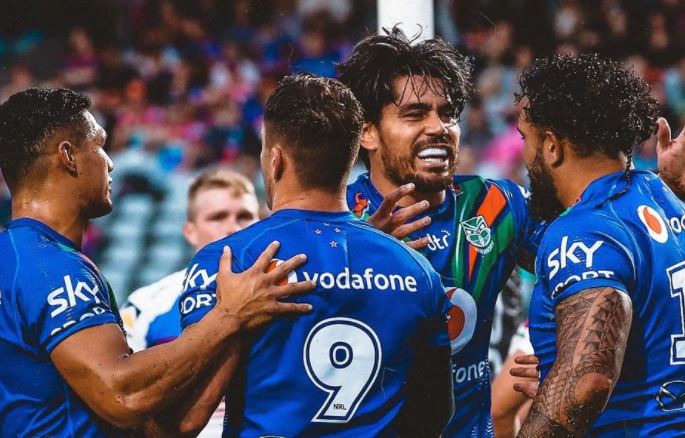 A tight game has ended 16 – 20, with the Newcastle Knights overcoming the New Zealand Warriors late in the game for the win.

It was a ‘local derby’ in almost every sense of the word, with Gosford’s Central Coast Stadium being filled with a multitude of Newcastle Knight jerseys to rival the region’s emerging Warriors fans.

The opening 10 minutes involved surmounting waves of Warrior pressure on the Knights’ defence with the home side making the most of the new ‘six-again’ rule changes for a 10 metre infringement. Three kicks were placed into the Knights’ dead ball zone, but were well smothered by the alert Newcastle side.

This first opportunity ended in nought when Warrior winger, David Fusitu’a was tackled out the side line by a combined tackling effort initiated by Bradman Best and Hymel Hunt.

Up the other end of the field, it was the Knights who were able to strike first after a dropped ball by Tyson Frizell was jumped upon by halfback, Mitchell Pearce. A quick scoop up by Jayden Brailey caught the Warrior defence back-tracking and his low body height allowed the Hooker to get beneath three Warriors players, before wiggling one-eighty to get the ball grounded on the turf.

A successful conversion by Mitchell Barnett gave the Knights a 6 point lead.

Despite this set-back, the Warriors were quick to respond in the 30th minute with a brilliant advance from their defensive 20-yard line up to their try-line, again capitalising off two ‘6-more’ calls by referee, Grant Aitkins. It ended with – seemingly – the second try to a hooker in the match, this time with Wayde Egan skipping off his outside-boot from playing the ball to shoot up to the line.

However, a video review reversed the on-field decision on the grounds of possession being lost by Egan prior to the grounding.

Before the end of the first half, a penalty conceded by Warriors player, Jazz Tevaga, gave Barnett the opportunity to re-establish his team’s lead with a shot at goal in front of the posts, which he took with ease.

The second half began with the Knights finding more success at the end of their positive play. In the 49th minute, the ball came out wide during a Knights attack with a quick passage of passes, finding Best second to last on the wing.

Advancing forward, the young star fended away Nikorima with his right hand while lining up an accurate flick pass to Hunt on the wing with his left. The winger had the space to dive for the corner and score the try, and another successful kick from Barnett, this one being his hardest attempt on the night, brought the score to 6 – 14.

An excessive trial came for the Knights’ defence soon thereafter, with a couple of penalties conceded in their defending quarter. The initial grubber kick by Chanel Harris-Tavita was leapt upon by Tex Hoy for the Knights, but a forward dropped ball by Starford To’a, due to a heavy hit from Eliesa Katoa, gave the opportunity back to the Warriors. From the scrum, the Warriors hit back at the Knights and on the third phase found the white line.

Captain Roger Tuivasa-Sheck gave the all-important final pass, delayed to the very last moment before finding Adam Pompey with the half yard needed to squeeze in on the inside shoulder of To’a and carry himself forward to the chalk. Nikorima’s conversion of Pompey’s try brought his team’s trail back to a two-point deficit with over 20 minutes to play.

It was only eight minutes later that the game changed on its axis with the Warriors taking the lead for the first time. The play came on the second phase from a second attacking line pass given by Harris-Tavita. The ball found its way through the line to Tuivasa-Sheck, who effected the overlap with his fast advance at the defence, before passing to Ken Maumalo on the wing with enough pace and space to find the corner. A missed conversion kept the game at its previous two-point margin, this time with the Warriors leading.

In the final twist of the match, a strong response was put together by the Knights, ending in an open play try to take back the lead. From their attacking 40-yard line, Brailey fed Connor Watson at pace who found Best. A missed tackle by his opposite, Peta Hiku, gave Best the attacking edge. A desperate diving tackle from Nikorima caught Best, but opened up the inside line for Hunt to advance on off an offload and stroll home for the four-pointer, turned to six by Barnett.

With less than four minutes left, the situation turned dire for the Warriors, and a wayward pass by Sironen after half a break gave the possession back to the Knights. Not finding another chance, the game then ended at 16 – 20, with the win going to the Newcastle side.

It was a disappointing end to a hard-fought match that was close to going the way of the Warrior, but it was not to be. The New Zealand side now have a week to prepare for their Round Three outing in the NRL against the Canberra Raiders, to be played at GIO Stadium on Saturday, March 27.