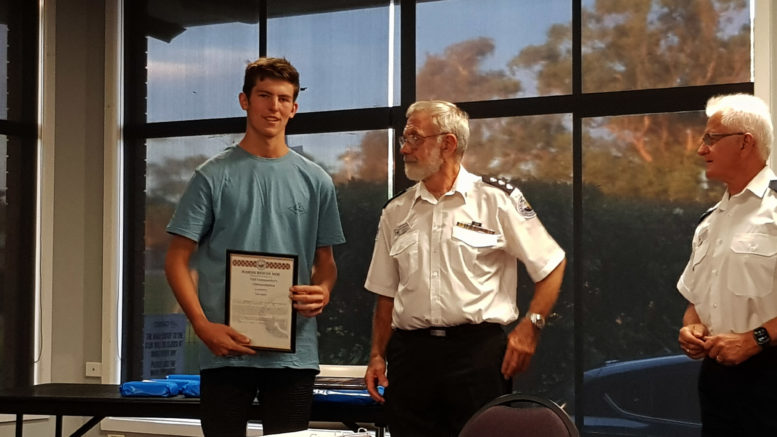 Tim Lumby has received a citation from Marine Rescue Tuggerah Lakes for his role in the rescue of a mother and son from a capsized boat.

Lumby was presented with a Unit Commander’s Commendation for outstanding contribution to public safety.

“After a year of not being able to hold a mess meeting, other than over Zoom, we had the extreme pleasure on Monday evening, March 8, of presenting Tim with the Unit Citation,” said Tuggerah Lakes Unit Commander, Tony Younglove.

On Sunday, October 4, 2020, while boating on Tuggerah Lakes near the entrance to Wyong River, Lumby went to the aid of an elderly woman and her son who were suffering slight shock and hypothermia from being in cold water after falling from a capsized boat.

“His quick thinking and bravery in dangerous weather conditions has no doubt assisted in their safe return to land,” Commander Younglove said.

“If Tim had not done so it would have been a very serious incident.”

A crew from Marine Rescue Tuggerah Lakes arrived on their rescue vessel TL20 and completed the rescue, arranging for ambulances to attend to the woman who was very ill from exposure after being in the water for some time.

“All on the scene were wearing lifejackets and this prevented what could have been a more serious outcome,” Commander Younglove said.

“Tim’s assistance to Tuggerah Lakes 20, his exemplary conduct, compassion and dedication to the care of other members of the public reflects great credit on himself and his family.

“This is something you can cherish for the rest of your life.

“The community should be very proud and share in the recognition of Tim’s selfless actions in stabilising the scene, awaiting rescue,” Commander Younglove said.