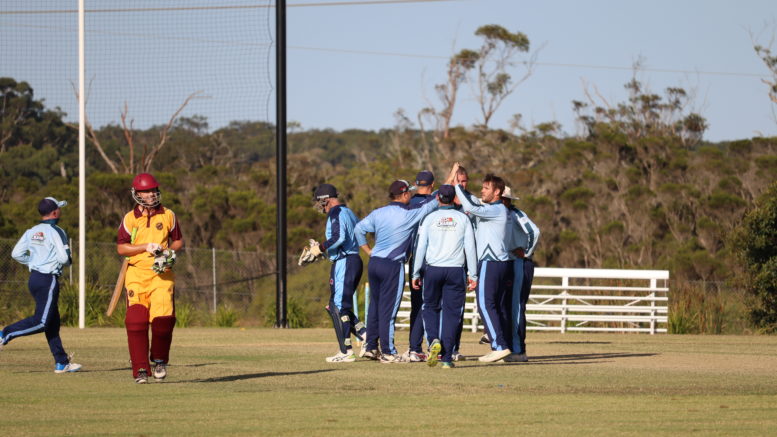 Another wicket taken by Warnervale, with Terrigal Batsmen walking

The Warnervale Wildcats have overpowered Terrigal-Matcham to win the 2020/21 Everything Sports T20 Grand Final on Tuesday (Jan 26).

Batting first, Warnervale set a score of 4/147 before Terrigal lost their last wicket with 116 runs on the board and one over left in their innings.

Starting at 4:15pm at Tuggerah Regional Sporting Complex, the Wildcats took to the bat as a fierce wind began blowing across the pitch.

While an early catch by Joshua Toohey off James Kennedy’s took out opening batsman, Mitch McNeilly in the third over, Warnervale found consistency through Chris Sheppeard, who partnered with Simon Keen for 28 runs, then Tony Cornwell for 36 runs, and finally an unbeaten 40 run partnership with Scott Atkinson to close out the innings.

Sheppeard’s 58 runs not out, off 49 balls allowed Warnervale to take to the field with a strong score to defend.

For Terrigal, there was early promise with Joshua Toohey posting 37 runs off 41 balls before being caught by Sheppeard off Karan Katli.

After this, there was a lack of fluency from the Bellbirds with the bat with two wickets, Simon Keen and Hunter Jackson-Sullivan, both falling to Kaine Harmsworth.

In the end, it was Warnervale who lifted the Shield.

The Jay Lenton Medal for Man of the Match went to Chris Sheppeard for his match-winning knock.

For the Bellbirds, the team’s thoughts will now turn to their upcoming One Day and Two Day competitions, with their first game against Northern Power commencing on Saturday, January 30.