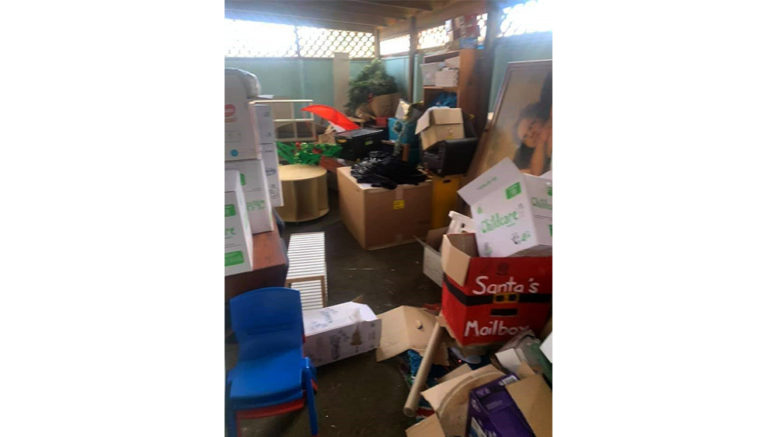 The storeroom where toddler Abel Bridge was trapped

A Department of Education investigation is underway about how two-and-a half-year-old Abel Bridge came to be trapped in a storeroom at Dinky Di Children’s Learning Centre in Lake Haven.

No one seems to know exactly how long the toddler was locked in the storeroom, but Abel’s mother, Samantha Bridge, said it appeared that the staff didn’t know he was missing until she and the boy’s grandmother, Christine Stace, arrived at the centre to collect Abel to take him home.

It was 5.40pm on Friday, January 8, when Stace walked into the Centre to pick-up her grandson and staff couldn’t find him, sparking a frantic search of the entire Centre.

Stace finally discovered the boy in the storage room out the back after hearing him crying ‘nanny help’, and after she pushed open the closed door, she had to climb up and over boxes, old fridges and furniture to get to him.

“I notified Dinky Di management straight away after it happened and I was told that they would investigate and if it was founded, they would report it to the Department of Education,” Page said.

“I reported it anyway because it is a serious incident.

“I am absolutely furious,” she said.

A spokesperson for the Department of Education said it was investigating the incident and an officer from the Department had been in touch with the family and would keep them updated on the progress of the investigation.

Dinky Di Children’s Learning Centres issued a statement saying that they were currently in the process of an investigation and that they took the safety, security and wellbeing of the children trusted to their care seriously.

The statement said Abel was one of two children present in the nappy changing area with an educator and during a brief conversation with the person who came to pick him up, Abel accessed the storage area.

“The child was located, unharmed, less than a few minutes after he had left the educator.

“However, Dinky Di Children’s Learning Centres regards this as a serious matter and so, in addition to reporting the matter to the Department of Education within the required timeframe, we are conducting our own internal investigation.

“Steps were immediately taken to address the issues that occurred and prevent them from recurring and we will take any further steps that may be required once the investigation is complete,” the statement said.

Samantha Page said: “Every time I hear from someone in management at the centre I get a different amount of time that Abel was missing – 30 seconds, a minute, two minutes, and that he was with the educator right up until we arrived at the centre to pick him up,” she said.

“I learned later that there isn’t even a lock on the door that goes to that storeroom, it gets locked with a piece of timber.

“There’s chemical bottles there, and they weren’t empty, I checked that to make sure, and there’s old fridges there.

“I asked why he was locked out there, but it was just their dismissive response that turned me off.

“I don’t know what to think, I’m horrified that he was even in there to begin with,” Page said.

She believes Abel’s soiled nappy might indicate how long he was trapped in the storeroom.

“My son has severe nappy rash and is now on antibiotics to treat blisters after being in his nappy for so long,” she said.

“Either they didn’t change his nappy all day, which wouldn’t surprise me because I’ve had that conversation with them before, or Abel was in that storage room for a lot longer than they’re letting on.

“Now if I shut doors in our house he screams ‘please don’t lock me in’.

“My GP has now referred us to a paediatrician for behavioural psychology for my son,” Page said.

“All I want is for them to do the right thing and discipline the people who were involved and apologise,” she said.