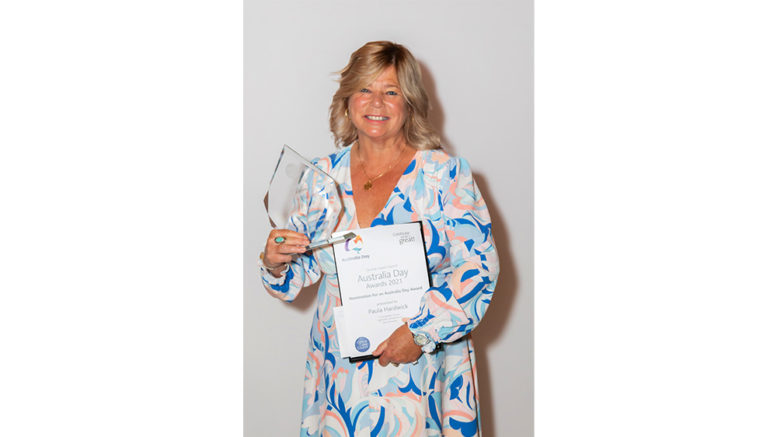 Citizen of the Year, Paula Hardwick

A volunteer with the organisation for the past 21 years, Hardwick increased her hours during COVID-19 restrictions last year, helping to ensure nutritious meals were delivered to the region’s most vulnerable and providing important social interaction.

Passionate about bringing happiness and cheer during a difficult time, Hardwick would often make her deliveries in costume, with clients being greeted by the queen, a teddy bear, a pirate, a clown and a nurse, among others.

“Each of our nine winners and three highly commended recipients have enriched our community through their unique achievements and contributions and I am thrilled to congratulate them on this honour,” Vaughan said.

“Our Citizen of the Year for 2021, Paula Hardwick epitomises what it means to be an Australian, having committed her time as a volunteer with Meals on Wheels Central Coast for more than 20 years.

“When COVID-19 restrictions came into effect last year and Paula’s role as a flight attendant ceased, she increased her commitment to Meals on Wheels and started volunteering several days a week to ensure her clients received nutritional meals and valuable social interaction during a difficult time.

“It’s this commitment to going the extra mile to support some of the most vulnerable members of our community that makes Paula a worthy recipient of our 2021 Citizen of the Year Award.”

Council Administrator, Dick Persson, said Australia Day honours are a celebration of the diverse and remarkable contributions of extraordinary Australians.

“To be recognised for your outstanding contributions to community life is an exceptional honour of which you should all be very proud,” Persson told recipients.

“Australia Day provides an opportunity to reflect on our history, to celebrate rich tapestry of cultures which make up our community and to look to the future.

“In doing so, I would like to pay special acknowledgement to the Coast’s Indigenous community, the Darkinjung people, who play a vital role in shaping the future of our region.”

Elyssia Gasparotto was named Youth of the Year.

A former Australian Sporting Representative and champion, Gasparotto has recently completed her academic studies, with a double degree in Aboriginal Professional Practice and Law.

She has also successfully fulfilled numerous appointments as an Australian youth representative to the United Nations, including Humanitarian Affairs Peace Ambassador, and contributed to the community as a professional beach and pool lifeguard.

Volunteer of the Year joint winners were Mervyn Lane and Pamela Price.

After retiring from the NSW Police Force following 40 years of service, Lane became a member of the Terrigal Fifty Plus Leisure and Learning Centre in 2010, holding several committee positions since and managing over 40 other volunteers, as well as the daily running of the centre and the upkeep and maintenance of the building.

Paul Lemmon, who continues to perform as an outstanding Masters athlete in the ocean and the pool, was named Sportsperson of the Year.

He is also a coach and mentor within the Terrigal Surf Life Saving Club.

Environmental Award winner was Sue Booth, who initiates programs and processes to protect native wildlife and is the wildlife champion of the valleys west of Wyong.

A member of the Chain Valley Bay Progress Association and 355 Hall Committee for the past 33 years, she has organised numerous activities and services within local halls and has organised Jazz in the Park to maintain connection in the community.

Winner in the Business Connecting Communities category was Kaylene Conway, whose not for profit what’s on website CC365 promotes local events and businesses across the Central Coast and has become the primary destination for events listings in the region.

Sharon Aldrick was named winner in the Arts, Culture and Entertainment category.

A well-known local photographer and community arts worker, Aldrick was commissioned in 2020 to take historically important photographs of the Central Coast during the COVID-19 pandemic, to be exhibited this year.

She has also dedicated herself to improving arts and culture opportunities on the Central Coast for the community, as well as mentoring emerging artists and artists with disabilities and has also been working with Central Coast indigenous dance company NAISDA to photographically document the experiences of NAISDA’s talented dancers.