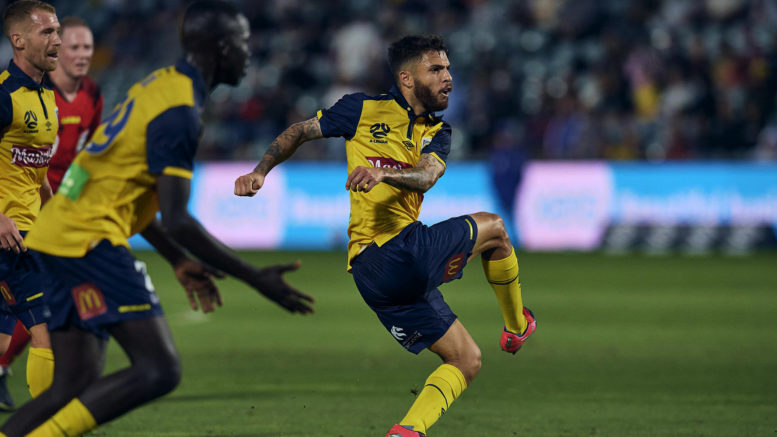 Danny de Silva in attack for the Mariners

The Western Sydney Wanderers have brought the dream start by the Central Coast Mariners to an end with a thrilling 1-0 defeat of the locals at Central Coast Stadium on Tuesday evening.

The goal that pinched the match for the Wanderers came late in the game after a dynamic contest that swung in momentum throughout the 94 minutes.

Both teams went into the game in form, with the Mariners winning their first two games of the season while the Wanderers had started their season with a win, a draw and a loss.

Of the past eight matches between these two at Central Coast Stadium, the Mariners have won only one in April 2019.

The first half finished goalless with the majority of chances coming for the Mariners who showed plenty of dynamism with the ball.

The Mariners maintained a deep defensive line, allowing the Wanderers possession in their own half.

A perfectly delivered free kick by Wanderers Captain, Graham Dorrens, in the 11th minute found the head of Simon Cox in space in front of goal, who blazed the ball well over the crossbar.

Another opportunity went begging when Simon again found space but was unable to clear the keeper.

Then, in the 60th minute, some brilliant work from Josh Nisbett saw him blast a reflex strike into the crossbar.

As the game went on however, the Wanderer’s took greater control of possession and their intensity lifted.

Wanderers debutante, Mark Natta, had a standout performance repelling wave after wave of attack from the blue and yellow.

Mariners coach, Alen Stajcic was clearly disappointed not to capture another 3 points saying he thought his team created the better opportunities.

The result has pushed the Wanderers to the top of the league table with seven points.

The Mariners now sit at third behind Macarthur FC with a game in hand on the two teams above.

The team will now meet Sydney FC in Sydney on Friday, 22 January.