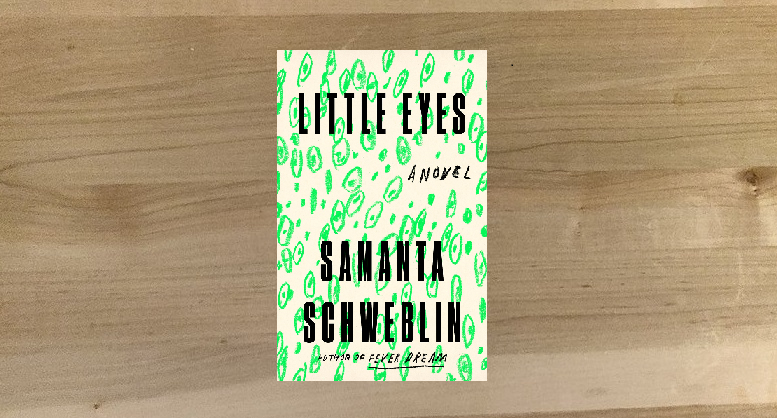 Kentukis are all the rage. “It’s a cell phone with legs.”

Keepers buy these gadgets with their camera and speaker enclosed within a toy animal such as a rabbit, crow, mole or panda.

The dweller, who lives in another part of the world, has control over the kentuki.

It is important to make sure the kentuki stays charged. Once it dies the connection is cut forever. (Oh, and the kentuki can’t speak, it can only make the sounds of the animal it imitates.)

We meet various keepers and dwellers throughout the world.
There is Emilia from Lima. Her son, the wunderkind, has been poached by a firm in Hong Kong and, to fill the void, he sends her a connection to becomes a dweller.

She connects with Eva, a keeper in Erfurt, Germany. Emilia grows quite attached to Eva, “She would focus on Erfurt and the girl, who wasn’t living her best life right now.

She would worry about her own life and her son’s later; she had all the time in the world.” Life is good until a friend buys Emilia a kentuki of her own, it isn’t easy being a keeper and a dweller at the same time.

There is Alina in Oaxaca, she purchases a crow and it follows her around until her artist boyfriend Sven takes it over for his art installation. As she sits around mulling the loss of her kentuki she thinks “That was what most infuriated her.

What was the whole stupid idea of the kentukis about? What were all those people doing rolling around on other people’s floors, watching how half of humanity brushed their teeth?” Marvin, a school kid in Antigua, is a dweller.

He is using the last of his mother’s money to pimp out his keeper’s kentuki. His mother promised him, “One day I’m going to take you to see snow.”

Now he is hoping to touch snow through is kentuki. In Umbertide, Enzo has purchased one under the direction of his ex-wife, saying it will be good for their son, Lucas. Enzo has tried to communicate with the kentuki but grows frustrated by the lack of response.

Now his ex-wife wants him to get rid of the thing – but he has grown too attached. Grigor is in Zagreb and is trying to get rich from kentukis.
He scours the town purchasing ipads. He is so busy he has hired his neighbour, Nikolina to help him.

She uncovers a sinister plot in Surumu. These kentukis sound far-fetched but is it so different than watching Big Brother or the dozens of other ways people allow their privacy to be invaded. The reviews (and by that I mean real reviewers) have given this book a multitude of praise.

Little Eyes is the latest offering by Samantha Schweblin, the Argentinian author of 2017 novella Fever Dream.

It is on many lists of best books of 2020. Like many books and movies about the latest technology, it aims to reveal something about human nature, about connections and empathy.

Essentially it asks the question of if you are (digitally) inserted into a stranger’s life, how does that affect them, and you? Is there an opportunity for the dweller to live a different (virtual reality) life vicariously through the toy their tech is embedded in?

How much do the keeper’s social inhibitions disappear when their lifelike companion is a toy? “Marvin was no longer a boy with a dragon; he was a dragon with a boy inside him.”

As provoking and unsettling as that was, however, I felt each story was a bit underdone.
It had potential but didn’t really go anywhere. Instead of several small stories about keepers and dwellers, I would have rather followed one (or just a few) story(ies) in more depth.

But perhaps that wasn’t the point.

In any case, let’s hope regulation kicks in because it raises some scary prospects of a future society where, “you couldn’t just count on people’s common sense.”

Mountain Districts Association calls on the Premier to close landfill