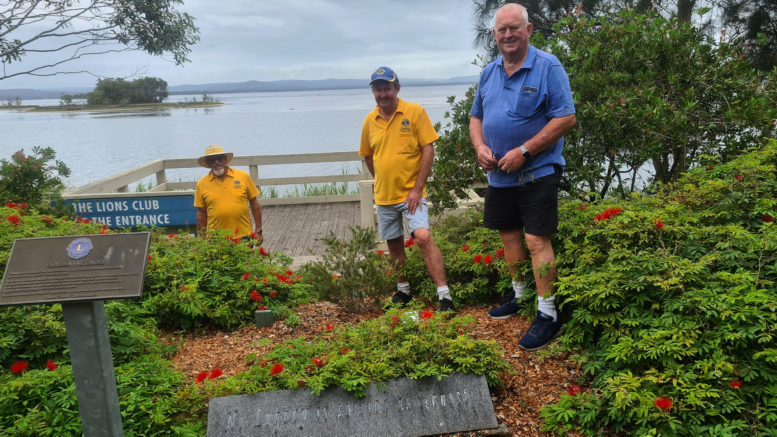 Vandalism and theft at the Lions Club of The Entrance Sensory Garden took a cruel turn a week ago when someone stole a memorial.

It all came to a head for Lions member, Warren Smith, who says that he spends half his life working in the garden, when a woman told him that she went to her late husband’s memorial tree and plaque and it was no longer there.

“People get very upset, rightly so, and we want everyone to know what’s going on because we’re sick of the damage that’s been going on now for quite some time,” Smith said.

Over the years since the Lions Club of The Entrance opened the garden in 2001, members have had to contend with continual graffiti, stolen plants or others just pulled out and left laying on the ground, rubbish left by visitors and strewn around the grounds, and even dumped toilet cisterns, doors, cots and other household goods.

“There’s that small percentage of people that can really cause you trouble and they just don’t care about the impact that their behaviour has,” said Lions President, Harvey Allen.

“How we change the attitude of people I’m not sure, but the normal household can get a Council pick-up of most things, so why would they bring it here to dump it?” he said.

Allen said the garden was a labour of love for Smith and another Lions member and garden co-ordinator, Don Grace, who started the project and put in years of effort.

“We asked the community to donate trees, and then as the trees were going in, the thieves turned up and that continues to this day,” Grace said.

“We can no longer replace the trees with flowering gums or grevillias for instance, as we’d like to, because they are too expensive, and if you put them in, then two days later, they’re gone.”

The Lions Club has erected a sign in the garden to let people know that they’re sick of the damage – a humorous take on a serious situation – which says “Please enjoy these Sensory Gardens”, followed by a warning that “Persons removing plants from the grounds may be eaten by wild lions”.

The garden is in a magnificent location overlooking Tuggerah Lake in Terilbah Reserve on Wilfred Barrett Dr, The Entrance North.

It is wheelchair friendly with a shared pathway from the northern end of The Entrance bridge through the garden to Two Shores Caravan Park.

A special feature is that it allows vision-impaired people to feel, touch and smell the array and aromas of textures.

The Sensory Garden is also home to two cenotaphs, one for the Returned Servicemen’s League and the other for The Entrance branch of the National Servicemen’s Association, where they hold a service twice a year.

It has also become a memorial garden for people to plant trees and a plaque in honour of their loved ones, and as the garden filled, there’s now a section at the garden entry where memorial pavers are placed.

There’s also a special area for children from The Entrance Primary School to go and spend time on gardening projects.

It all started in 1989, when Lions member, Tom Kalamanis, put forward the idea for a fragrant garden.

Grace was tasked with finding a suitable location and after Council approval, funding was sought and the physical work to clean-up the site began.

“This was an unused area and a dumping ground after the lake had been redesigned in this area and it was just a terrible mess with car wrecks and mattresses, you name it,” Grace said.

“To get things underway, for a number of years I supervised people on the dole and people on Community Service Orders to help and it was a great project to get them involved.

“People from Darkinjung Local Aboriginal Land Council came in to help as well as Lions’ members and their families, with some of them building the bridges and shelters.

“We’ve pulled out the noxious weeds and prohibited plants, and members of the Lions’ club hold a working bee here every month to keep up with the maintenance,” Grace said.

The Sensory Garden has attracted much community support over the years, including financial assistance from the then Tuggerah Lakes Catchment Management Committee, the State Government, the former Wyong Council, Westpac Bank, The Entrance North Coastcare, The Entrance Bowling Club, The Entrance Long Jetty RSL Sub-branch and The Entrance Lions Club.

Man sought after indecently exposing himself

Bright Nights @ The Entrance during March