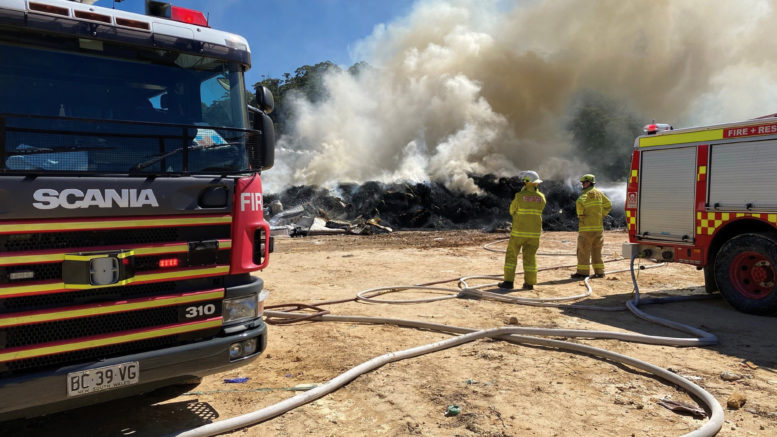 It took firefighters two hours to contain a fire which broke out at Woy Woy Waste Management Facility on January 10.

A Central Coast spokesperson said staff observed a stockpile of mattresses on fire at around 3.15pm.

The fire was too large to be managed by the water cart on site and at 3.20pm staff contacted Fire and Rescue NSW, who arrived around 3.45pm.

The fire was controlled and declared out at 5.45pm.

“Following initial investigations, it appears the fire was a result of spontaneous combustion of mattresses that were due to undergo resource recovery processing later in January,” the spokesperson said.

“Due to the types of materials used in the manufacture of mattresses, it created a significant amount of smoke.

“It is standard practice for mattresses to be stockpiled for shredding, which are intentionally stored in well cleared areas with adequate buffers.

“As such this fire did not pose an immediate threat to escaping offsite or to Council infrastructure.

“Council’s water cart suffered some damage from the radiant heat whilst spraying water at the fire and will be assessed.

“Council has reviewed high quality CCTV footage from at both sites and observed the fires were not deliberately lit and there were no suspicious circumstances,” the spokesperson said.

“There was minimal inconvenience experienced by the community, with the site operating as usual on Monday, January 11.”

The spokesperson said correct reporting and procedures were at the site with a full report including any recommendations to be prepared this week and submitted to the EPA within seven days in accordance with Council’s licences.

Station Officer Ben Ziekenheiner of Umina Fire Station 340 said Umina was first to arrive at the fire, with crews doing a defensive fire attack until it was under control,

“At this point they reverted to an offensive attack using an excavator to break up mattresses and debris so a final extinguish could be performed using hands lines.

Ziekenheiner said a Cafs pumper from Fire and Rescue NSW Kariong was also used and was “a good asset to have on the Central Coast”.

Ben Ziekenheiner said the cause of the fire was still under investigation.

“There was a fair bit of damage done to area so whether we can actually determine how it started I’m not quite sure,” he said.