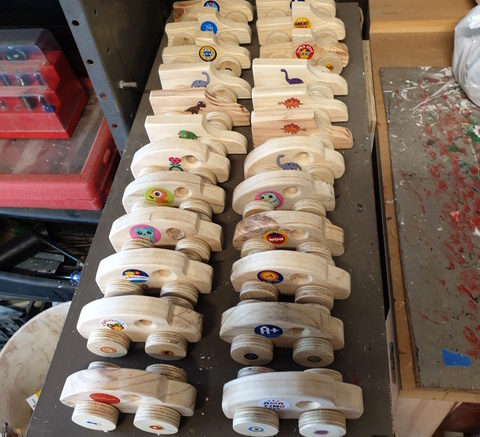 Cars made by men’s shed members

Over the past few months, members have been hard at work making dozens of wooden toy cars for the Central Coast chapter of women’s charity, Share the Dignity.

According to Shed Secretary, Geoff Bedford, around 60 cars were made, with the toys to be distributed to mothers and children in refuges on the Coast via Share the Dignity’s It’s In The Bag campaign.

“One of our member’s wives is involved with Share the Dignity, so when she approached us about making them some toys, we were happy to oblige,” Bedford said.

And while Bedford laughed off comparisons to Santa’s Workshop, this is not the first time Valhalla Men’s Shed members have taken on the role of Santa’s Helpers.

“In the past we’ve made similar toys for the Wyong Hospital Auxiliary to give to sick kids and we’ve also made putt putt golf boxes that we’ve donated to various community groups to give away.

“We like supporting our own community this way,” Bedford said.