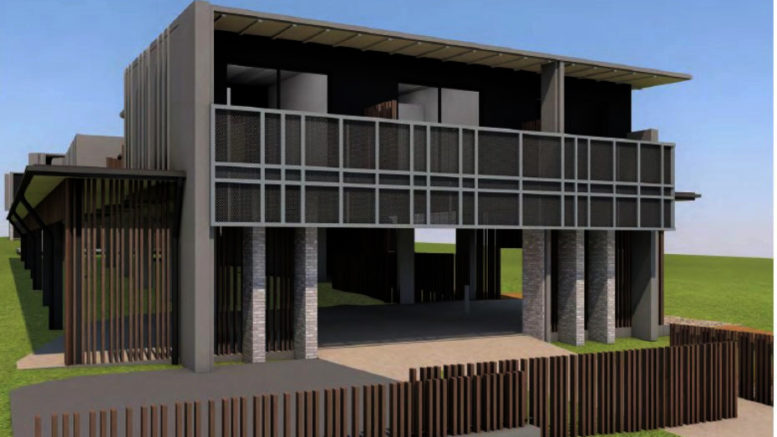 Concept drawing of the proposed boarding house at Kanwal

A boarding house to accommodate 44 residents at Kanwal has been given the go-ahead by Central Coast Local Planning Panel.

Development application 1505/2018 was first lodged early in 2018, and since then the proposal has been reduced from 28 double rooms to 17, plus 10 single rooms, for a total of 44 residents, as well as a manager’s residence.

The $2.9M two-storey project on 1,657sqm will comprise a series of buildings with a central driveway, an outdoor area at the rear and an interior common living room on the ground floor.

All rooms will have built-in wardrobes, a kitchen and a bathroom with a washing machine and a dryer.

There will be undercover parking for 15 cars, six motorcycles and six bicycles.

It will be built at 741 Pacific Hwy, near the intersection with Sparks Rd, and access will be off a slip road parallel to the highway.

Two petitions and 27 submissions were received during the development assessment period, with key issues being solar, privacy, intensity of use, compatability with the surrounding area, location and access.

He said the property management team had worked closely with their architect and Council to address all residents’ concerns and to ensure that the project complied with State and Council controls.

The proposal also encompasses the initiatives that Council has adopted in its Affordable and Alternative Housing Strategy, he said.

“I truly believe that the design and amenity proposed will not only benefit the many people struggling to find suitable, affordable private accommodation, but will also become an example of how a boarding house should be built and managed,” he said.

“We also have over 30-years’ experience in managing rental properties and lodgings, mostly with housing providers and housing groups.

“Our tenants are typically single mums or dads, students, retired elderly people and people with jobs generally on a low income or a social security benefit, and this type of accommodation suits them in both financial and lifestyle aspects,” Karahalios said.