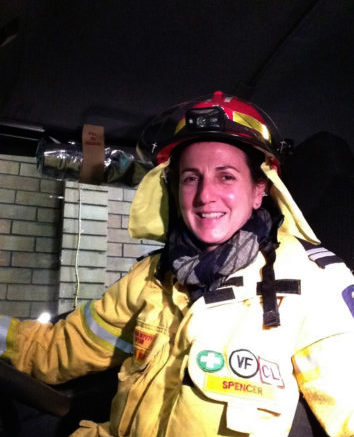 Spencer RFS is the first and only brigade she has been with since 2004.

“It is a proud moment to be leading the brigade,” Wade said.

“There are around 20 volunteers who work, in Spencer and everyone puts in a lot of work.”

Wade has been acting captain for over a year since former captain, Jock Ross, found himself recovering after a motorbike crash at Wisemans Ferry.

Wade said being captain of the Spencer brigade ran in the family.

“My relative Hugh Woodbury was the original captain of Spencer Fire Brigade for 23 years, finishing around 2002,” she said.

“Before he sadly passed away, I promised him I would be the captain one day, so here I am.”

Coming into the hotter summer months, Wade has some big shoes to fill.

However, she is not as worried as she was at this time last year.

“There are concerns regarding grass fires out west,” Wade said.

“I think around the Central Coast area we should be okay.

“In saying that, because of the rain we have had this year, everything has grown back very well and there is still a lot of fuel load.

“The threat is not as high, but we cannot be complacent.

“It has not been soaking rain either, so the ground is still relatively dry.

“We have lost a lot topsoil from the previous fires and the rain has helped wash a lot of it away.

“Gum trees after bushfires shed their bark on to the ground which adds to that extra fuel.”