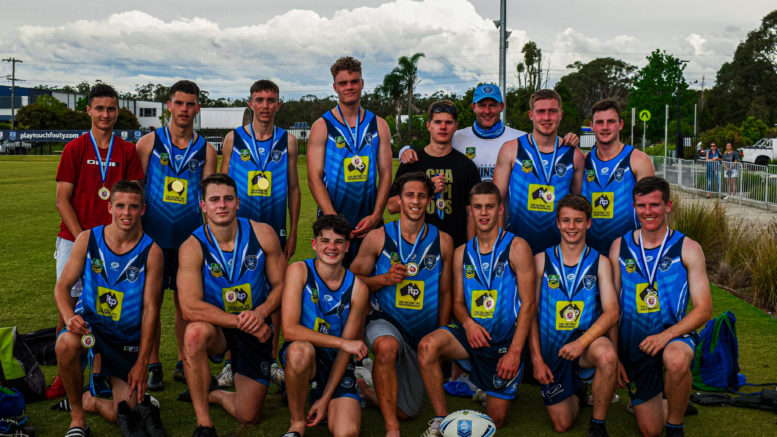 The recent tournament saw the Peninsula Piranhas men’s U20s team follow their 2018 State cup title to clinch the win from strong teams such as Newcastle, Port Macquarie and Macksville.

It was a new-look for the Peninsula team with only six players remaining from the state cup winning team of 2018.

The Piranhas faced a young Port Macquarie team in the final, with tries to Eddie Dillon, Sandon Smith and Keiren Diamond seeing the Peninsula team claim the title 4-3.

Team captain Tom Sawyer said the team was happy with its achievement over the weekend tournament.

“Forget the scoreboard – it was the way that this brand-new team came together that I was most happy with,” he said.

“The win was built on our defence and working hard for each other.

“We’ve now got our sights set on the State Cup in December and this was a really positive and important step towards that.”

Over the two-day tournament, the Piranhas won comfortably over local hopes Doyalson, followed by a hard fought 6-3 win over Macksville, and a comfortable 9-1 victory over Maitland.

Day two saw the Peninsula team face off against arch-rivals Newcastle in a tough 4-3 encounter, before clinching a comfortable 8-1 victory over Wagga.

Coach Matt Sawyer said it was pleasing to go through each round undefeated, but the team was aware of the quality of their opponents in the finals.

“We needed to be focused and prepared to work hard for each other,” he said.

The Piranhas clashed against Macksville again in the semi-final, running out 4-3 winners.

The Peninsula was also represented by the women’s U20s and mixed open teams at the tournament, but both were unable to qualify for the finals.

Gold a-plenty for Wyong and Mingara in Country Championships